Spring in the Seattle area alternates between dark, rainy days and bright, sunny ones.  When a spell of bad weather descends, we enjoy hiking and camping on the east side of the Cascade Range, where the skies are usually sunny.  On this trip we headed east, leaving behind a wall of ominous skies at Snoqualmie Pass.  There were three of us: my wife Karen, our friend Sue, and me.

Our goal on this trip was to explore Black Canyon and Bear Canyon in the general area of the Tieton River Canyon, which features dark basalt formations in hexagonal columns, and open Ponderosa Pine and Big Sagebrush landscapes.  Most of this area lies within Wenatchee National Forest and the Oak Creek Wildlife Management Area, though there is also some private land.  The Nature Conservancy has played a key role in buying and preserving this extraordinary landscape.  And it is beautiful in spring to the eyes of a sun-starved Washington mossback.

This region is known for ticks, so we took the dorky-looking precaution of tucking our light-colored long pants inside our white socks.  Then some of us also sprayed with a DEET-based repellent.  It seemed to work, since we didn’t pick up any ticks all weekend.  Plus we applied sunscreen and wore hats so that our fishbelly-white Western Washington bodies wouldn’t be damaged by the glaring sun.  But there were other hazards …

After the long drive, when we first emerged from the car to look at some Bitterroot flowers (genus Lewisia, named for the discoverer, Meriwether Lewis), Sue spotted a snake looking limp and dead on the basalt.  But it wasn’t dead, only cold.  We prodded it awake with a stick and saw the rattles as it slithered into a hole between the rocks: it was a Western Rattlesnake!  This discovery reminded us to remain vigilant.

Our first hike was into Black Canyon.  The trail lead steadily upward, leading past Trembling Aspen groves and an old settler’s cabin. The cabin was in a pretty setting near a stream, and we could

imagine the sounds of horses and cows and chickens and children in the clearing a hundred years ago.  The aspens wore evidence of more recent visits.  The bark on every tree was covered with marks from the ground to roughly head high.  But this graffitti wasn’t made by vandals or lonely shephards: 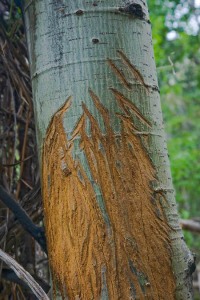 it was made by Elk using their teeth to scrape deep into the bark to get nutients and sugar from the bark’s inner layers.  The marks then last for as long as the tree.  On the trail itself we saw a scent post used by a Coyote.  This is a spot along the trail where a Coyote or Coyotes had deposited scat over time, one layer after another.  Interesting stuff, that poop.

The trail led higher, through scattered Ponderosa Pines and hillsides covered with sagebrush and scattered late wildflowers.  While walking along the edge of the trail, Karen was startled by a dry rattle within a few feet of her boots.  It was another rattlesnake, this one coiled and ready for battle with the towering intruders.  At first it rattled almost continuously, but by the time I got there it had quieted down, deciding that Karen wasn’t such a big threat, after all.  I photographed the rattlesnake, the thought briefly crossing my mind that I would like to reach down and remove a blade of grass in front of its face.  I thought better of it, and decided that Photoshop would be a safer way to cut away the grass.  It struck us how well the rattlesnake’s skin blended in with the natural brown and subtle green tones of the landscape.  If the snake hadn’t rattled, we would have never known it was there until … 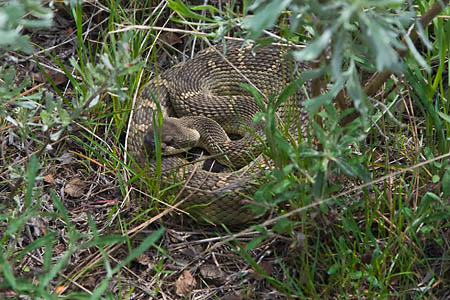 Higher still, we came into open hills, where we examined wildflowers and covered up, because the sky had darkened and big drops of rain sputtered down.  At that point we decided to head back down, and drive back to our campsite at the Wenas Campground near Naches.  By the way, this is a terrific campground that is also known variously as the Boise-Cascade Campground and the Audubon Campground (there is a yearly spring gathering for birdwatchers here).  BYOW (bring your own water) and be prepared to share the campground with ORV users, but the Ponderosa Pine grove here is gorgeous.

The next morning, we packed up our gear and drove to the Bear Canyon trailhead.  The trailhead showed promise, with towering Ponderosa Pines framing basalt cliffs.  This was a beautiful place, and we learned from another hiker that the Nature Conservancy had preserved this canyon.  That hiker

later asked if we had seen the scratches at about eye level on a tree along the trail.  I had seen the marks, but the source didn’t register until he mentioned that the scratches had been made by a cat–specifically the big cat known variously as Cougar and Mountain Lion.  And the scratches were fresh, as if the Cougar had come through just before us.  This was a reminder, if another was needed, to be wary and alert in this back country.  Unfortunately, we never saw the Cougar, but just knowing it was in that canyon added a whole new dimension to the hike. 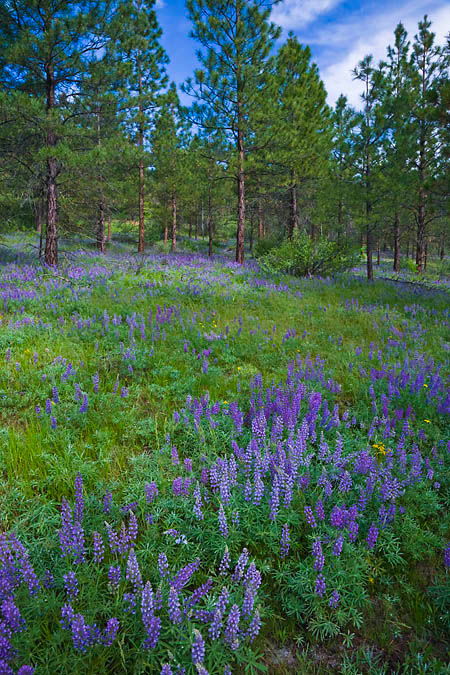 We arrived at the trailhead late in the day, not knowing what we would find below Mount Edith Cavell in Canada’s Jasper National Park. A married couple from the USA–perhaps from Oklahoma or part of Texas by the twang–excitedly told us that this was the best area they had seen during their week in the Canadian Rockies!  So we got out our camera gear and started down the Path of the Glacier interpretive trail.

This snowy north side of Mount Edith Cavell was breathtaking (or maybe it was the altitude!), and it has always been a significant landmark in the Athabasca River Valley.  Three glaciers live on this side of the mountain:  the Angel Glacier, the Cavell Glacier, and the smaller Ghost Glacier.  All are retreating, as are most glaciers along the Rocky Mountain spine of Canada and the United States.  Blame climate change.  In fact, in a few short years Glacier National Park in Montana may have no glaciers at all.  What shall we change the name to at that point?  I know:  Glacier National Historic Park!  But I digress …

Mount Edith Cavell was named for a heroic English nurse who helped soldiers escape from the German onslaught during World War I.  When caught, she was executed by the Germans.  A genuine hero, she is celebrated in this Canadian outpost of the old British Empire by the mighty mountain.

The Path of the Glacier Trail meanders along a valley that was occupied by Cavell Glacier several decades ago, but has now been freed from the frozen grip of ice.  Conifers and a few wildflowers are starting to return to the valley, but the growing season is so short that it will be decades before the subalpine forest feels like a forest and not one of life’s most remote outposts.

When we reached Cavell Pond, into which Cavell Glacier calves, it was near twilight.  The aquamarine lake was frozen, and numerous icebergs were stranded in the pond and along the shore.  It was a spectacular place.  We photographed until the light faded, then decided to come back the next day to see it again and to get closer to Cavell Glacier. 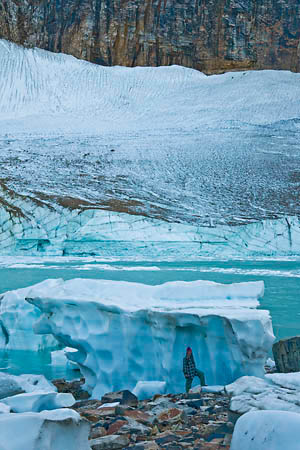 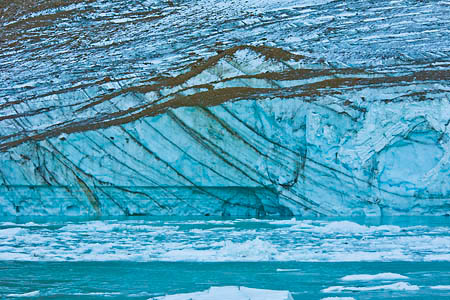 The next day, we hiked to the glistening face of Cavell Glacier and looked the ice age in the eye–then backed down, deciding the ice age was tougher than us and that we had no desire to live in the same terrain as Wooly Mammoths and Sabre-toothed Cats.We spent the rest of the morning photographing icebergs, ice details, pioneering lichens, and a pair of Common Ravens who had little fear of modern people.  Their distant ancestors undoubtedly interacted with ancient humans in this icy terrain, perhaps hanging around during the hunt in order to claim some bits of Caribou flesh–which undoubtedly would have been healthier for them than the Cheetos that some hikers tossed to the contemporary scavengers.