America has a wondrous array of interesting places and cultures, including the Yup’ik Eskimo village of Togiak, located on the remote shores of Bristol Bay in Alaska.

Pilot at the Piper’s controls during the short hop across taiga and tundra from Dillingham to Togiak, in which Karen and I were the only passengers

A bumpy 70 mile plane ride from Dillingham to Togiak, Alaska, took us over Black Spruce taiga, which soon gave way to pond-splattered tundra and rugged hills.

We were the only two passengers on the long-in-service PenAir Piper; when Karen asked if we could take pictures in the air, the pilot joked “as long as I’m not doing anything illegal!”

From the air we photographed the meandering rivers and beautiful green tundra landscapes, with ponds speckled by lily pads.  Looking down, I saw a Brown Bear digging in the earth, going after Arctic Ground Squirrels or favorite roots.  As we approached the coast, we sailed over the village

of Twin Hills and took in the view over Bristol Bay and out to the Bering Sea.  The village of Togiak, huddled along the coast below, was our destination.

Togiak was to be the staging area for our trip to Round Island, a Pacific Walrus sanctuary in Bristol Bay off the Alaskan coast, which is accessible only by a chartered boat.  Many Round Island visitors spend numerous days in Togiak, because frequent high winds make the journey impossible in a small craft.  In fact, a couple of men from Manhattan, who shared the island experience with us, had an extra wind day added to both the beginning and end of their trip.

After landing in a cloud of dust on the gravel airstrip, we climbed down the wing to the ground, then dumped our duffels into the open back of a late-model red Dodge pickup.  The native driver asked where we were going; when we said Esther’s B and B, he knew exactly where to take us, which was only a few blocks away.

Actually, there were a few other cars and trucks in this village, which stretches for maybe a mile along Bristol Bay, and we counted three school buses.  But mostly people got around town by four-wheel ATVs, 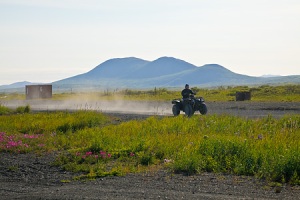 and by snow machines during the long winter.  This town, like most along the coast, is isolated, with no roads connecting it to other Alaskan settlements.  Supplies are brought in by air and by ocean-going barges.

Over 90% of residents are Eskimos; their lives are a blend of traditional subsistence and modern conveniences.  There were brilliant red Sockeye Salmon drying on racks in the warm sunshine, with delicious belly strips of salmon curing in a smokehouse, while satellite dishes beamed in Nickelodeon and the daily soaps to appreciative young and old audiences.  Walrus and seals are shot for food each autumn, but there is also a well-lit supermarket 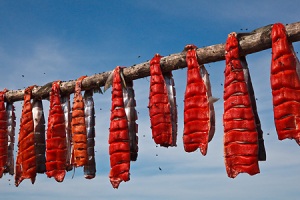 with fresh produce and plenty of junk food.  By the way, when we asked Esther what Walrus tastes like, she said it looked like dark beef but tasted like clams!

This Yup’ik Eskimo village has been in the general location for at least 2,000 years; the earliest dwellings were long ago replaced with an assortment of several hundred weathered houses, stores, and service buildings.  According to the 2000 census, 809 people live in the village.  Based on the number of young Eskimo children and pregnant women we saw, the next census will see a substantial jump.  The median age in town is a very young 23.

Bristol Bay and the Togiak River are famous for their fisheries.  Paul Markoff, our charter boat operator (http://www.visitbristolbay.org/togiakoutfitters/)pointed out the cannery across the bay from the village.  During our visit, many of the village’s men and boys were out in the bay fishing; some of the catch is for themselves; most is wholesaled to Togiak Fisheries, the local fish processor.  Paul pointed out that much of this is sold in Costco stores around America. The Togiak River sports runs of Sockeye, Chinook, Silver, Pink, and Chum Salmon, and is the destination of sport fishermen who fly in to several fishing resorts.

Since we were visiting on Independence Day, there were special celebrations going on.  We went to the beach bonfire, which was hosted by the cannery and attended by scores of local children, who toasted marshmallows over the flames and smushed them into a graham cracker sandwich with a chocolate bar.  Mmmmm.  Actually, we’re a bit old to enjoy s’mores, but we enjoyed watching the cute Eskimo kids having

a good time.  Several little girls were piling gravel into the bottom of their shirts, folding the cloth over, and pretending they were pregnant.  One girl asked us why we were wearing our down jackets; after all, it was a warm summer evening.  I guess Eskimos have a different tolerance toward cold!

Speaking of cold, Paul Markoff said that the winters get to be really long.  The bay in front of town freezes completely, and even part of Bristol Bay freezes over, as temperatures sometimes drop to -40°F.  The dusk of winter daytime last four or five

hours, and this is a time to hunker down and dream of spring.  But, since the people have snow machines, they can also take long trips in the winter.  Paul spoke of people who made the overland trek to Dillingham on their machines.  Togiak, like many native villages, is a dry town, with no alcohol to be in the possession of anyone at any time.  Marijuana is another matter, with weed being the drug of choice by some of the village folk (as it is throughout much of Alaska).

Later on the 4th, there were to be traditional fireworks over the town, but we were too tired to partake.  Besides, fireworks at midnight during the perpetual light twilight of an Alaska summer night is not quite the same as seeing them against a dark sky.  Eskimos are patriotic Americans, with a tradition of proud service in wartime.  Interestingly, Yup’ik Eskimos also live across the Bering Sea–in Russian Siberia.  The old tribal roots don’t fit so neatly into the politics and allegiances of the modern world.

Upon our return from Round Island, Paul Markoff took us on an ATV tour of town.  We visited his family’s salmon drying and smoking racks, and went into the house of an elder craftsman, Willie Wassillie,who made art objects from Walrus tusk

ivory.  We looked at his wonderful carvings, and selected a miniature Walrus to purchase.  He spoke little or no English, so his wife interpreted for us.  Meanwhile, we were interrupting her watching of Days of Our Lives, which was showing on the living room TV.  Traditional and contemporary America side by side in the home of a Yup’ik Eskimo.

Willie Wassillie, a Togiak Eskimo and master craftsman in the medium of Walrus ivory.  Upon returning home, we were able to view several additional pieces of his work at http://alaskanativearts.org.  This Walrus ivory is taken from animals hunted sustainably and for subsistence. 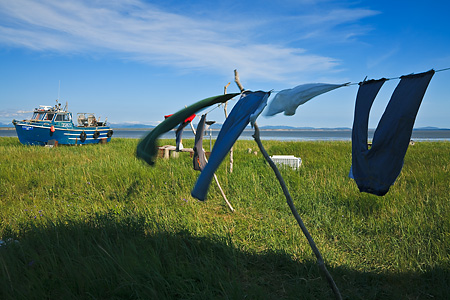 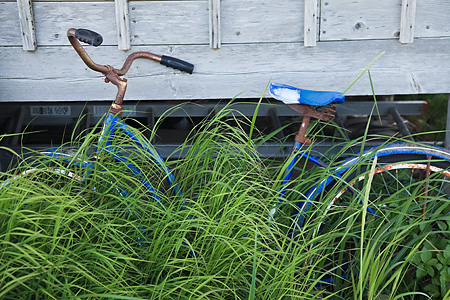 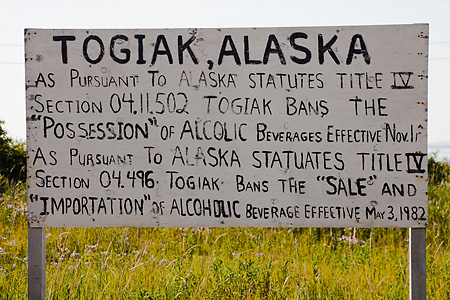 Togiak is a dry village, with no alcohol allowed anywhere 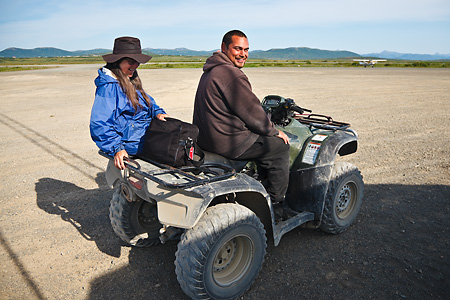 To view three other weblog stories of our Round Island trip, go to:

I am the Walrus

Puffins and Auklets and Murres, Oh My!

Experiencing the Walruses of Round Island, Alaska

3 thoughts on “4th of July in an Eskimo Village”