Alpenglow on the tip of Mt. Shuksan, high in the North Cascades

Deep twilight came early high on the slopes. Karen and I had just finished photographing alpenglow on the high peaks and sky surrounding the Mt. Baker Ski Area, and had strapped on our headlamps in anticipation of the darkness we would encounter as we descended the slopes from Artist Point.

“Have you seen my Dad?”, asked a teenage girl who snowshoed up behind me. I replied that I hadn’t, and she said she had planned to meet up with him after they had taken different routes in the mountains. She, with youthful energy, had ascended a steep slope to see what was on the other side; he, with less energy, agreed that she could go alone if she agreed to meet back at the base of the slope. Well, time went by and it was soon getting dark, and she was still high above their proposed meeting place.

I asked her if she would come with us, since we were heading back to the same parking area, and she agreed. She didn’t have a headlamp, or car keys, or the necessary emergency supplies should she be stuck in the mountains after dark. We stopped and asked several groups if they had seen a man looking for his teenage daughter, but nobody had; we asked them that if they did encounter him to let him know that she was heading back to the parking area. She also called out, in case her father could hear her, but he didn’t. She didn’t have a cell phone, so I lent her my iPhone and she twice tried to call her dad, but his phone was switched off (AT&T actually has a great signal at the Mt. Baker Ski Area).

We switched on our headlamps and eventually made it to the parking area. I asked the girl to ask people in the parking lot if they had seen her dad, while I went to get our car (we told the girl that we would stay with her, in a warm car, as long as necessary).

Just before I got back with the car, the girl’s father appeared at the parking lot, clearly upset with and worried about his daughter.

It had a good resolution, but what would have been the next steps if the father had not shown up?  It turned out that the truck camper where the girl first asked if someone had seen her father was the overnight camp for a ski patrol member. He said that if the father hadn’t shown up soon, they would have quickly mounted a ski patrol search for him, including people on skis and snowmobiles. They probably would have found him quickly, but you never know.

Moral of the story?  Stuff happens in the mountains, despite best intentions. It is always good to “Be Prepared!”, as the Boy Scout motto of my youth always commanded.  When in the mountains, have a headlamp, firemaking ability, extra warmth, food, and a plan. Always. Which reminds me, I’d better add some matches to my pack …

There is a warning sign at the parking lot that is intended to scare the daylights out of winter travelers. It warns people of avalanches and cliffs, and ends by saying “You or your heirs will be charged for any rescue a minimum of : $500.  RESCUE MAY NOT BE POSSIBLE.” Good point.

Hey, this means you!

Okay, enough of the gloom. There was also a human story of joy. While snowshoeing at Artist Point, we came upon a young couple who asked me to take their picture with Mt. Shuksan in the background. I did, and the photo looked great on the LCD screen.  Then the young woman said that they had just become engaged to be married. I asked when they had become engaged, and she said “Just now!”  So we were the first to hear the happy news.  Artist Point, one of the most beautiful viewpoints in North America, was a lovely place to pop the question. On the other hand, had she said no, it would have been a long trudge back to the car.  We told them that we have now been married for 38 years and wished them well.

Okay, now that I’ve spent all my time talking about our human encounters, perhaps I should spend a moment talking about the wild nature we encountered. Actually, maybe I’ll just let the photographs speak to that. Suffice it to say that it was really cold and really windy, and we were glad to be wearing our red Antarctica parkas.

It was simply amazing how winter sports have changed in the last two decades.  There were hundreds of snowshoers and almost no cross-country skiers, and a good share of the snowshoers were wearing little plastic MSR snowshoes that seemed to work really well. Snowboarders have taken to the incredibly steep backcountry slopes in huge numbers. Everywhere there was a 70% slope, boarders had carved graceful sloloms down the expanses of snow. I admire these fearless young boarders, especially now that I am at an age when I can break an ankle while stepping off a curb. There were also lots of winter campers; I counted 18 tents in several areas, and other people were digging snow caves like winter Hobbits.

Winter camping in the basin below Mt. Herman

It was great to see so many people enjoying the outdoors, getting away from their Facebook, Tweeting, (and blogs!) for a day.

Snow blowing on a wind train straight from the Arctic

This is me snowshoeing at Artist Point (photo by Karen Rentz)

In these snow conditions, a snowshoer would compress the snow, making it denser. Then the wind would come in and scour the loose snow around the compressed snowshoe track, leaving a raised imprint of the snowshoes.

Rime ice covered all the trees at the highest elevations

Look carefully at this precipitous slope to see the snowboard track leading down the mountain; these snowboarders have a healthy dose of crazy courage!

A group of snowshoers descending from Artist Point

Conifers and rime ice on the lower slopes of Table Mountain

Steam from a volcanic vent on Mt. Baker catching the last rays of sun

The summit pyramid of Mt. Shuksan at  day’s end. This mountain’s sculpturing was done by glaciers, not volcanic action.

For further information about the Mt. Baker area in winter, go to: 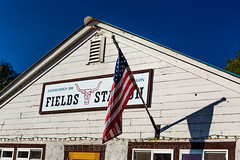 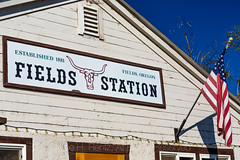 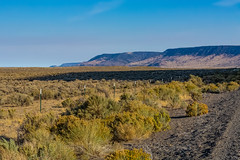 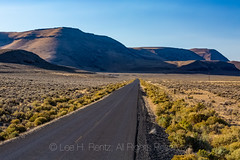 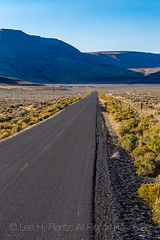