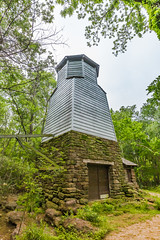 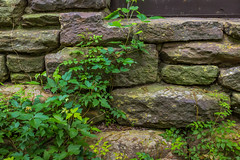 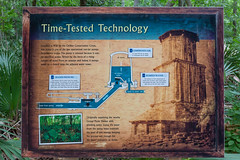 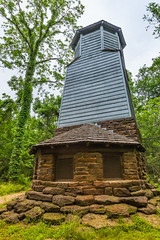 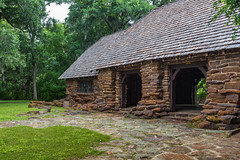 As we crossed Willoughby Creek along the sandy shores of Shi Shi Beach, vacationing biologist Mike Layes greeted us and pointed out a Peregrine Falcon about 100 feet away, perched atop a dead gull on the beach. Mike had been camping, and said he had seen the falcon make several kills where the stream meets the Pacific Ocean.The falcon looked briefly at us, then resumed plucking bright white feathers from the gull it had just killed.

The mouth of Willoughby Creek is a gathering place for gulls, who drink from and bathe in its waters and seek protection in numbers of its own kind. In fact, when we were hiking down the beach, looking for a place we could get water, I had mentioned to Karen that the gathering of gulls ahead looked like it could be at a source of fresh water. Turned out, it was.

Gulls gathered at the mouth of Willoughby Creek

The gathering of gulls didn’t provide safety in numbers in this instance. Mike said the falcon dove fast and hard on the gulls, scattering them and giving it an opportunity to take one down. The strange thing was, once the falcon began defeathering and devouring the dead gull, other gulls landed and settled back into their routines–just twenty five feet away! Maybe they figured that the victim had it coming. More likely, they had seen it all before and figured they were safe as long as the predator was occupied with lunch.

Peregrine with a gull feather in its beak

The falcon sees the Bald Eagle targeting his prey

The falcon dug into its meal, holding down the carcass with its talons as it tugged on the meat. Suddenly it became alert and looked south. In the distance, from the sea stacks of Point of Arches, we saw a distant Bald Eagle heading straight toward us. The falcon instantly took to the air, like a fighter pilot taking off to intercept an enemy bomber. The eagle closed the distance quickly, and withstood the missiles of hate that the falcon aimed its way. Then the eagle wheeled in the sky above us, and descended toward the falcon’s gull carcass. It missed the first time, but on the second swoop it adeptly grabbed the carcass in its talons, on the fly, and began slowly gaining altitude. We watched as the enraged Peregrine Falcon buzzed it with all the skill of a Top Gun. Alas, all to no avail as the eagle flew with its pirated treasure back to the sea stacks at Point of Arches.

Bald Eagle with its eyes fixed on the falcon’s prey

Bald Eagle with dead gull in its talons, being buzzed by an angry Peregrine Falcon

During his day on the beach, the biologist had seen this battle scenario repeated three times. We went back the next day and the next, and sat and waited for another display of aerial combat. Alas, it was not to be. Apparently the falcon decided that three strikes and he was out.

You can view a video of the event on YouTube at: The Peregrine and the Pirate.

We did see the falcon once more; it came to quietly drink from Willoughby Creek, high on the beach, as we and others watched it from about 100 feet away.

We saw Brown Pelicans and Black Oystercatchers along the shore, and Wilson’s Warblers and a Hermit Thrush in our campsite, but the alpha experience was watching a professional pirate at work, skillfully turning the falcon’s ability to hunt to its own advantage. Arrrgggh!

Feathers plucked from the gull by the Peregrine Falcon, now floating at the edge of Willoughby Creek

Shi Shi Beach is a wilderness beach within Olympic National Park. It stretches over two miles in a gentle, sandy crescent, ending at the dramatic rocky sea stacks and arches of Point of Arches. We backpacked along the beach, and on this Fourth of July weekend we guessed that there were 60 tents sharing the beach and the adjacent forest. Hikers need to be aware of the tides, which can have an amplitude of over ten feet and can affect hiking and tide pool exploration schedules at Point of Arches. Hard-sided food containers are required for backpackers (to keep away marauding Raccoons), as is a wilderness permit from the National Park Service and a recreational permit from the Makah Indian Reservation. Parking for backpackers is $10 per day at a private residence near the trailhead. For more information about Shi Shi Beach and Point of Arches, go to Olympic National Park: Shi Shi Beach.

7 thoughts on “SHI SHI BEACH: The Peregrine and the Pirate”