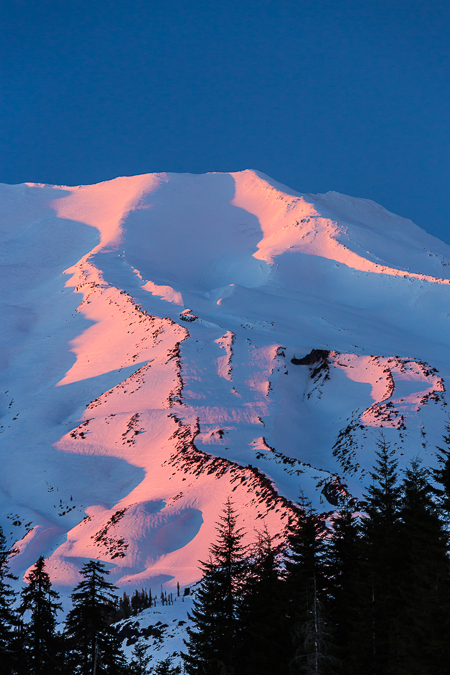 The last light of a clear winter day brings a sculpture of pink and blue to the snows of Mount St. Helens

33 years after the eruption that blew the top off Mount St. Helens, the volcano is quiet, with some visible wisps of smoke and ash coming from the crater. It will probably blow up again, but the next major eruption could be decades or centuries in the future. Nobody knows.

Meanwhile, there are lava fields and pumice plains and cave trails to explore. We have made frequent visits to the popular viewpoints in summer, but we had never ventured to Mount St. Helens in the winter, so we thought it would be a good idea to escape the gray winter clouds of Puget Sound for a day of snowshoeing. 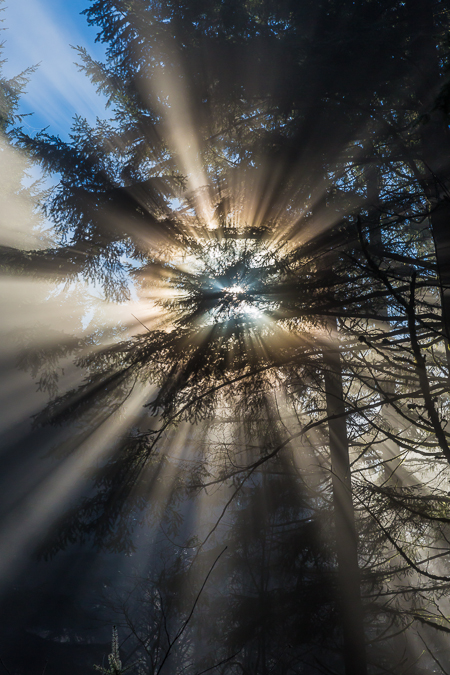 When we drove up from the coastal lowlands of Washington, we emerged from the layer of clouds that so often blankets the region in winter; I stopped here to photograph the godbeams streaming through the trees at this place of transition from murk to sun 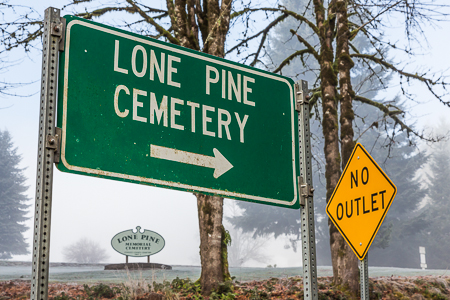 I love signs, so I stopped to photograph this amusing juxtaposition of signs along the route to the trailhead

At the parking lot, we saw this colorful glove sticking out of a plowed snowbank; I should have checked to make sure it wasn’t attached to someone

It turned out to be an ideal day in the mountains, with temperatures warm enough that some winter climbers were going shirtless. Not us. And we aren’t climbers–not in the sense of the scores of crampon-and-rope laden men and women we could see as tiny specs moving against the snow, high on the slopes above us. We’ll leave that experience for a younger generation.

We were content with our snowshoe hike to June Lake, a tiny lake fed by a waterfall tucked next to a bouldery lava field part way up the mountain. The first mile of the trail was noisy, as we shared the route with snowmobiles who zipped by at warp speed. Then we diverged, and had a quiet climb to ourselves and other snowshoers.

Tiny June Lake, with its dead trees and waterfall; I ventured out onto the ice to get some photographs and was lucky that I didn’t fall through 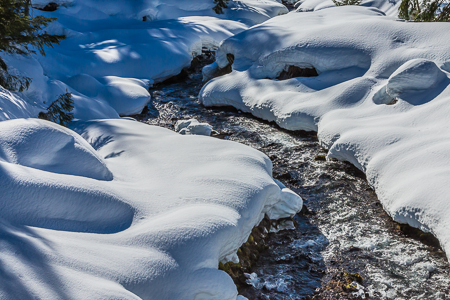 Stream tumbling down the mountain from June Lake

Snow had fallen off the trees in a high wind, so the forest itself didn’t possess the magic of a fresh snowfall, though we did observe some Coyote and Snowshoe Hare tracks. When we went higher, we broke out into the open when we reached June Lake and its waterfall. There we had lunch, with our cheese and crackers and nuts and cookies spread out between us on the snow. An organized group of perhaps a dozen college students was having lunch there as well; except that they were also swirling and sipping Merlot from clear wine glasses.

After lunch, Karen made a snowman, while I snowshoed up a lava field to photograph boulders that were completely covered with snow. It was a glorious afternoon! 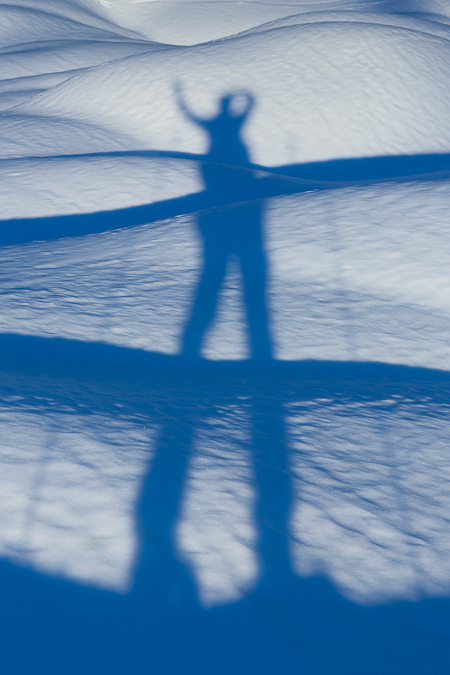 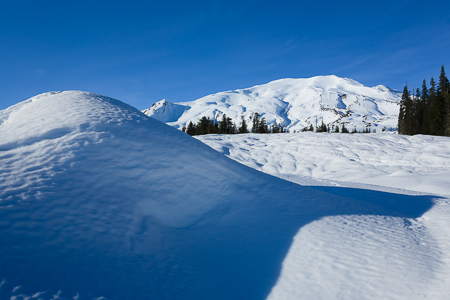 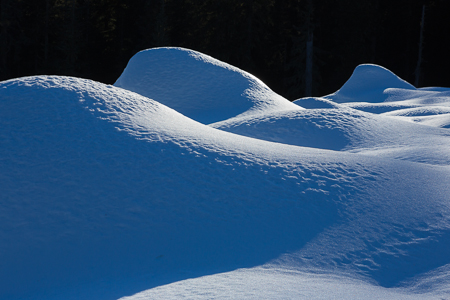 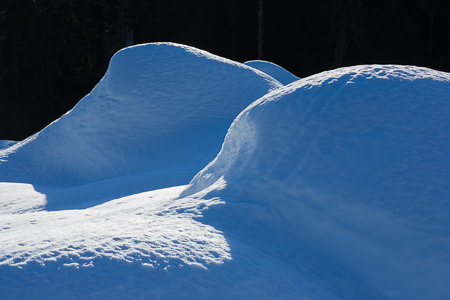 Mount St. Helens provided a pleasant winter interlude that day, but on many winter days it is much more of a challenge. Recent climbers have talked of whiteout conditions and 40 mph winds and skiing down a sandpapery surface of pumice-covered snow. 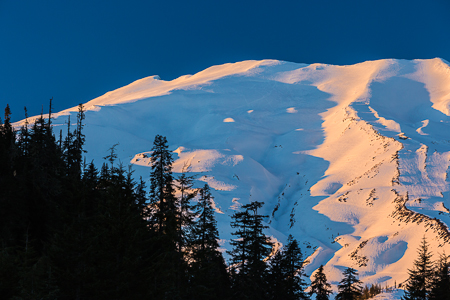 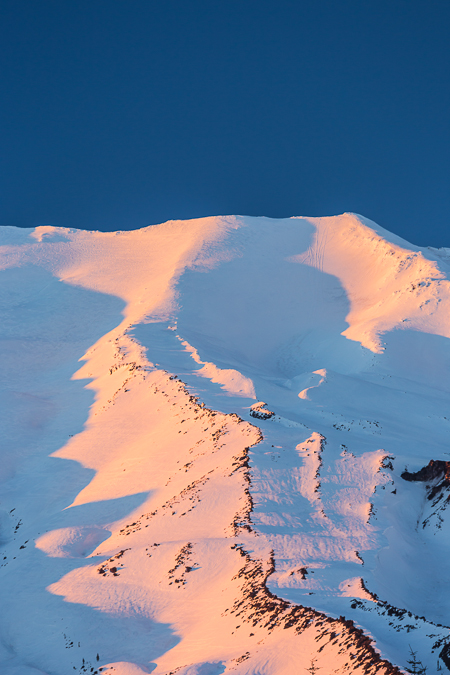 Last pink light on the mountain (technically, this is not alpenglow, which occurs after the sun has set)

We started descending the trail in late afternoon. At a place where a vista toward the mountain opened up, we paused, and realized that there was the potential for some great light. The late afternoon light already sculpted the mountain, which was a nice change after the flat light earlier in the day. We decided that it was getting late enough that we might as well stay for the last light on this clear January day. We lingered, and photographed the last magenta light on the mountain as the sun descended. It made for an interesting end to a great day of snowshoeing in the Cascade Mountains, a day that had started with a desire to leave the gray skies of our Puget Sound home and get some sunlight.

After we photographed the last light on the mountain, we snowshoed out by headlamp. Snowmobiles whined by us in the darkness and one snowmobiler gave us a thumbs-up as we paused to let him pass. 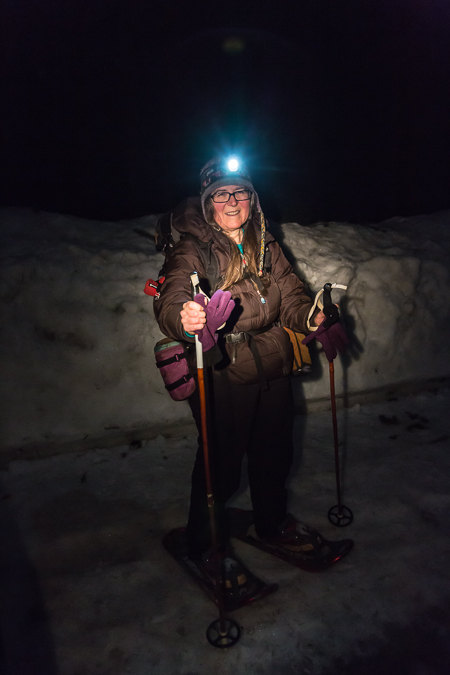