At one point, a big Manta Ray swung up from the ocean bottom and came directly toward us, with its gaping mouth open, and circled within perhaps a foot of us–not touching any of us. It was a thrill beyond belief for this landlubber from the great Midwest.

A Manta Ray glides toward us in the Pacific Ocean, lit by the lights of divers and snorkelers 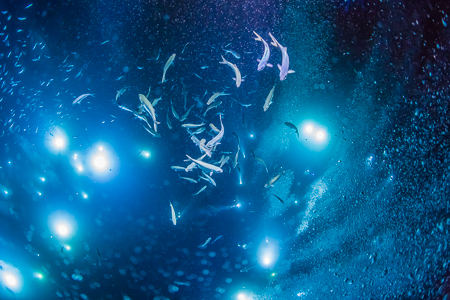 A magical view of fish gathering in the lights

The idea was intriguing. We would go out at night in the Pacific Ocean and snorkel with huge Manta Rays with 15′ wide wingspans that would come within inches of us. Or maybe the idea was just plain scary! Anyway, we decided to do it.

One key thing to realize is that Mantas are not carnivores who would eat people. That helped. Yes, their mouths gape wide and could swallow Jonah or Karen, but that has never happened (to the best of our knowledge!). They eat the ocean’s small stuff, such as shrimp and plankton and small fish, much as many kinds of whales eat small krill and some Grizzly Bears eat moth larvae (oops, not a good example, because they eat much bigger stuff too!).

We checked in at a dive shop at a strip mall in Kona. The enthusiastic staff outfitted us with wetsuits and prepared us for the experience. They had us sign the waiver form, and told us to meet at a marina at 5:30 p.m. We drove there and met up with our group, and with the staff who would be guiding us.

We signed up to go out on a tiny boat with three crew members. Our group had ten snorkelers and two scuba divers: four Swiss, two French, two Canadians, and four Americans. All of us had some previous experience in the ocean, though in the case of Karen and I it was just a few hours previous snorkeling, and that was in shallow waters.

When the boat was ready, we climbed aboard and motored out of the marina and into the choppy Pacific Ocean. We surged north along the coast, bouncing along the waves in the early evening. When we reached our destination, we set anchor and wriggled into our wetsuits, enjoying and enduring all the joking of the crew. The staff really went out of their way to make us feel at ease in what was a really alien experience for all of us. However, we were there long enough, bobbing in the ocean, that Karen grew queasy with the motion; we should have taken two tablets of Bonine.

Preparing for the experience, putting on wetsuits and checking our gear

One guide asked the divers if they were sure they could handle the idea of a huge Manta brushing right by their heads; one tiny young woman from Switzerland looked scared to death, but she decided to do it anyway. The divers were told not to wear snorkels attached to their masks, because the Mantas can sense the electrical fields of the human body and not touch living flesh, but the snorkel projecting above the head wouldn’t be sensed, and they could collide with it, ripping off a diver’s mask. I don’t even want to think about that possiblity, but I suspect it happened once upon a time.

Viewing Manta Rays is a surprisingly social experience. Several companies take out clients to one spot in the ocean, near the Kona airport, where the Mantas are known to feed. The people who want to scuba dive go down to the ocean bottom with bright dive lights. They are spaced out by the boat crews so that they cover perhaps a 100 x 100′ area of the ocean floor, and they project their dive lights upward. Those who want to snorkel grab onto a floating square made of PVC pipe with their two arms, and look downward. Each boat has its own floating square, and each square is equipped with lights projected downward. The night we went there may have been about 100 people participating, with perhaps twice as many snorkeling as diving. 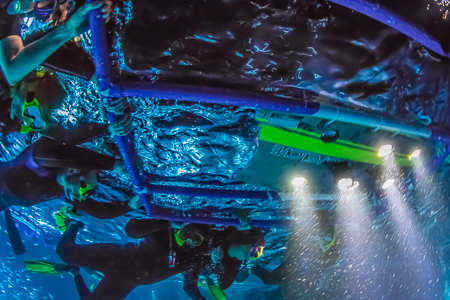 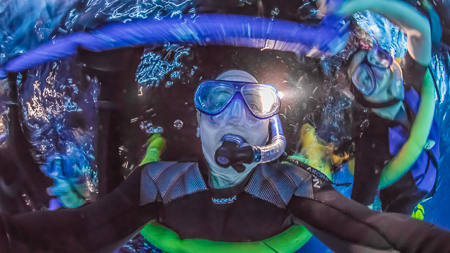 Self portrait at night, using a noodle float to help stabilize me and my big camera housing

Bubbles rise from the scuba divers below; Karen was wearing a shorty wetsuit and said that the bubbles uncomfortably tickled her arms and legs

The whole experience hinges upon the lights, so the more lights the better. With all the lights in the ocean, plankton and other small prey creatures swim toward the lights, which concentrates this source of food for the Manta Rays. The rays have come to expect this, so they come to feed near the lights. Which is why we get to see these otherwise hidden creatures of the deep. Over two hundred different Mantas have come to feed here; the staff can identify them by the markings on their bodies.

We climbed down into the dark water and swam over to the floating square. As a group, we moved out away from the boat and began peering down into the water, at once seeing the magic of all the lights projected up from the ocean bottom. I felt like I was in a spaceport, expecting the alien Manta spacecraft to arrive any second. By this point on our Hawaii trip, breathing through a snorkel became almost second nature, so we were able to relax in the ocean. The ocean was warm enough that we felt entirely comfortable in our wetsuits.

Hawaiian Flagtails gathered in the lights to feed, attracted to the concentration of plankton

Actually, it took some time for the Manta Rays to arrive. In the meantime, fish swirling in the lights kept us entertained and gave my itchy shutter finger something to do (I can’t stand it if I can’t take pictures!). Eventually, two Mantas swam gracefully into view, and I discovered that my alien spacecraft vision was not very far off. They truly do look alien.

At one point, a big Manta swung up from the ocean bottom and came directly toward us, with its gaping mouth open, and circled within perhaps a foot of us–not touching any of us. It was a thrill beyond belief for this landlubber from the great Midwest.

The huge mantas wheeled gracefully in the ocean

Eventually, the lights on the ocean bottom switched off as the divers started ascending, and we kicked our way back to the boat and climbed aboard, adrenaline and endorphins coursing through our thrilled bodies and minds.

That night we only saw two Mantas, but some nights they see about 25. It was such a profound experience that I would love to do it again.

Video by Karen Rentz of the experience

The company we used for this trip was Big Island Divers, and we were extremely pleased with their competence in dealing with all of us novices.