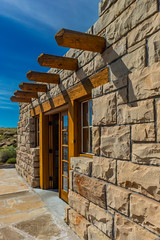 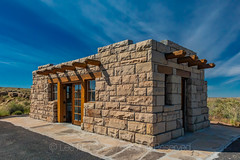 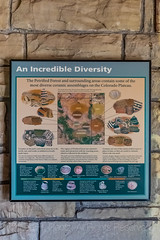 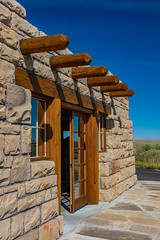 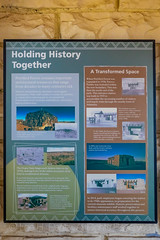 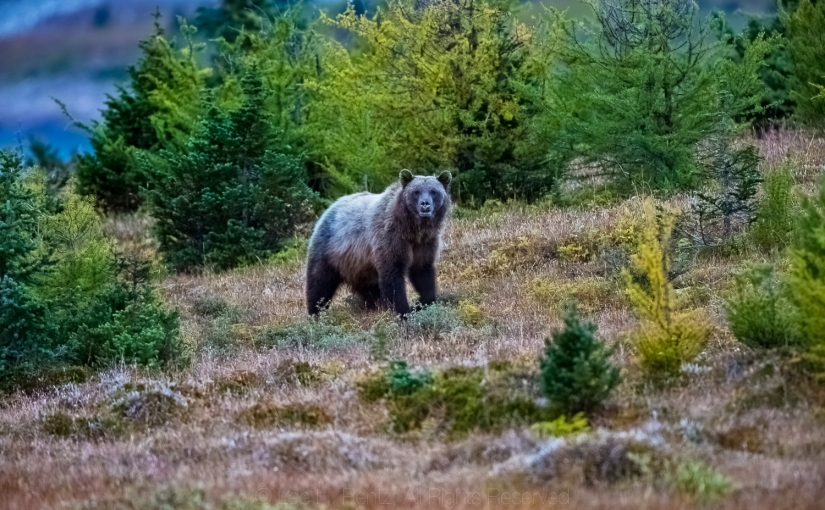 Karen and I have encountered Black and Grizzly Bears occasionally, and these sometimes make for memorable stories. Here are five adventures that we can’t possibly forget, along with assorted bear photographs I’ve taken in recent years.

WATCHING BEARS AT THE DUMP

My family used to take camping vacations to state parks back in the 1950s and 1960s. Of those, Fort Wilkins State Park at the tip of Michigan’s Keweenaw Peninsula, which sticks up like a long curved finger into Lake Superior, was a favorite. This was an early army outpost established in 1844 to keep order during a copper boom in the region, and there were cannons and a fort that excited the small boy in me.

But the coolest thing we did as a family there was to drive the ’57 Chevrolet station wagon to the dump and wait until dark, lined up with all the other classic Detroit cars. At deep dusk the bears arrived one by one, until there were five. They poked their snouts into the fresh garbage and turned over cardboard boxes with their powerful legs and claws, each working independently of the others. I remember one was a big cinnamon-colored bear, while the others had black hair. I’m sure the dump smell and flies were awful, but it was thrilling to see bears up close for the first time in my life.

Dumps used to be a special way for families to experience bears outside each small town in the Upper Peninsula. Those days are long gone, but those of us who experienced bears at the night dumps will never forget the adventure. Here is a sampling of memories of that time by many people: https://www.pasty.com/discuss/messages/313/617.html

SLEEPING WITH A BEAR

1982 in the High Peaks of the Adirondacks

We were camped in a dense stand of Red Spruce high in the mountains. We knew that there were bears in the mountains, so we hung our food, but we didn’t have the mental acuity or experience to hang the food correctly in a tight grove of toothpick trees.

An hour later, in the tent, we heard a dreaded sound outside. I opened the zipper, and of course it was a big American Black Bear of the bad boy kind. I startled it by poking my head out the opening, and the bear responded by immediately climbing a tall spruce within five feet of our tent. So, it was a standoff, with me looking nervously up at the bear and it looking nervously down at me, occasionally clacking its teeth to warn me how fierce he was.

The standoff lasted all night. I had finally fallen asleep and didn’t wake up until we heard the sound of claws descending on bark. We quickly got dressed and I assumed the bear had skedaddled away, but instead it went directed to our hanging food bag. I think the bear had gotten into the food before coming close to the tent the night before, and the torn bag waving in the breeze and a pile of plastic bags below told the story. We finally chased the bear away, but we were short on food the rest of the weekend trip. My morning ration of instant coffee had bear saliva on its torn plastic container, and we never did find the peanut butter.

In the years since then we have learned to engineer a relatively bear-proof hanging bag under most circumstances, but it is often a challenge that most hikers don’t master, based upon most of the hanging food bags we see. Bear spray is also a good idea, though I don’t normally carry it in Black Bear country.

FENDING OFF A BLACK BEAR WITH STONES

We left our rental car in the parking lot at the trail leading to Hannegan Pass to begin a backpacking adventure in North Cascades National Park. At the trailhead we had an unusual siting of a Black Bear wandering around, and in the trail register comments someone wrote “pesky bear!” We set out on our ten day backpack into lowering clouds.

We set up camp among blueberry bushes and conifers, cooked dinner and hung our food in two heavy bags from a tree branch, then retired to our tiny tent. The next morning, we got up and immediately found a Black Bear under our food hang, trying to get at it. I yelled at it and threw some stones to try and chase it away, and it left, But I had a feeling that it wasn’t done with harassing us, so I went to where I anticipated it might approach the bag next, and lo and behold, there it was! So I threw more stones, hoping to discourage it. After a couple more parries, the bear finally left us alone.

Later in the day however, as we were hiking, a bear descended a mountainside at an angle that would intersect with us, causing us to be really apprehensive about its intent. It came within 20 yards of us, and I suspect it was the same pesky bear, but we hiked beyond without incident. The rest of the trip was bear-free, but those first two days were more than a bit unnerving.

BEING BLUFF-CHARGED BY A BLACK BEAR

We hiked the 13+ mile trail to Enchanted Valley on a spring day, early in the season when Red Alder leaves were emerging. It is a long hike but the setting in the valley was worth it, with waterfalls cascading off the gray cliffs. We set up camp and talked to a national park ranger about a murder mystery we were reading called The Dark Place, by Aaron Elkins, which was set in that very part of Olympic National Park. We hung our food from a tree, then soothed our hike-weary bodies in our warm sleeping bags.

The next morning we awoke to see a bear foraging in the hummocky gravel of the Quinault River’s flood plain. I went out with my camera on a tripod and got too close to the bear; I knew that when it bluff-charged me and I hurriedly backed up, even with my long telephoto lens.

Then the ranger came out of the old hotel building, converted to a ranger station, and also saw the bear. He thought it was an opportunity for a photo, just like I had. He was wearing a wife beater undershirt instead of his uniform at that early hour, and he also had a camera. Only his was a point-and-shoot camera without a telephoto, so he had to get much closer to the bear than I did. It then bluff-charged him! It was really funny to watch a ranger–who knew better–get so close to a bear!

SURPRISING GRIZZLIES ON THE TRAIL

We were high in the Canadian Rockies, staying in log huts with hobbit-height doors during a snowy September. This park is known for its Grizzly Bears, and we had to be careful about walking to the outhouse from the cabin. One morning we awoke to Grizzly tracks near the cabin, heading up a nearby trail we were going to walk later in the day. When we did the hike in a group, we came upon big rocks that the bear had turned over and dug around using the enormous strength in its front legs and claws (these huge muscles terminate in the hump on the back that is characteristic of this species). It had been searching for hibernating ground squirrels or marmots and could quickly dig them out of their winter chambers.

One morning our group rose well before the crack of dawn to walk a trail past Lake Magog and the Mount Assiniboine Lodge and into the trail system beyond. We had headlamps on because it was a dark, cloudy morning. The man ahead of me suddenly stopped and said “There is a big mammal in the trail just ahead.” We waited, and a Grizzly cub, hefty after a summer of ground squirrels and berries, crossed the trail. Then there was another, soon followed by mama. We had our bear spray unholstered and at the ready, and Karen began whistling three loud blasts with her whistle to alert another part of our group that had been late in getting started.

Fortunately nothing bad happened, even though we were in extremely close proximity to the mother and cubs. They left the trail area and moved off about two hundred yards, where the mama began furiously digging for ground squirrels, with the two cubs imitating her. She even stood up on her hind legs repeatedly to sniff the air; we think there was probably a big male–dangerous to her cubs–in the area, based upon a guy we met who was camping with his dog in the nearby campground. His bear encounters were scary enough that he rented a cabin for the next night.

Nothing like Grizzly encounters to set the heart racing!

You can see more of the work of photographer Lee Rentz at his website: leerentz.com