Corpse Flower (Amorphophallus titanum) blooming in all its magnificent size and stinky glory at the University of Washington in Seattle.

Life goes to all lengths to get sex; after all, without sex, we have no birds, bees, or babies. But some sex is just plain weird, as in the case of the Corpse Flower (Amorphophallus titanum). Think about the root meaning of those Latin words for a moment, and you will understand why Sir David Attenborough came up with the less “dirty” name of Titan Arum to use in his BBS television series, The Secret Life of Plants, instead of the scientific name.

Corpse Flower is a gigantic botanical simulation of rotting meat, complete with a fetid odor and a deep burgundy color to help create the illusion. It even raises its own temperature to make the illusion of decomposing meat more real. And who is it trying to attract with all this grossness? Why, carrion beetles and flesh flies, of course, which are its pollinators! Everything it does, it does for sex–kind of like some politicians who make the news, but we won’t go there …

Impressive in size, the Corpse Flower blooms only occasionally through the years, and sports the color, temperature, and fetid smell of a large rotting animal

I went to the University of Washington botany greenhouses in Seattle, after seeing a story in the Seattle Times about how this plant was about to bloom. On that afternoon of June 9, I joined about 60 people in line to wait for our chance to file past the magnificent plant and experience its sensory pleasures. Alas, my sense of smell is not working well because of seasonal allergies, so I couldn’t smell a thing. It’s just as well, based on some of the descriptions of the gag-inducing stink, which is said to be so bad that it can make a person’s eyes water.

Anyway, the plant was gigantic and most impressive; those of us who stood in line were rewarded with the chance to climb a ladder and look down inside the flower. The cutest among us were also rewarded with having pictures taken by a media photographer (he didn’t bother with me).

Climbing a ladder to view the Corpse Flower’s interior

Corpse Flower lives naturally in the Sumatra rainforest, but it has relatives here in North America, including Calla Lily and Skunk Cabbage. The Eastern Skunk Cabbage (Symplocarpus foetidus), which grows in swamps in places I’ve lived, including Michigan and New York, also has a meat color, strong odor, and the ability to generate heat–which helps it melt snow in early spring, AND to spread its wondrous odor better.

Now the flowering event is over, and it is time to patiently wait for that 100+ lb. root to decide that it’s time once again to surprise us with a magnificent bloom. It might happen in a couple of years, or perhaps in a human lifetime. Nobody knows, and that is part of the wonder of its nature. 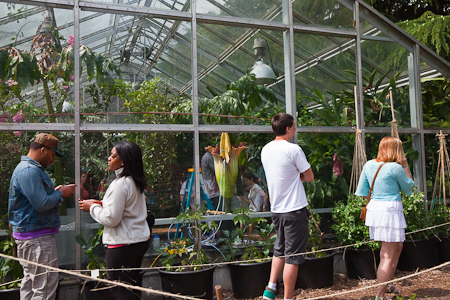 University of Washington botany greenhouse, with the Corpse Flower visible inside 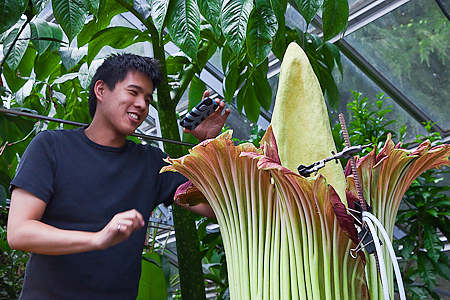 Virtually everyone took a picture of the gigantic flower

Wikipedia has a good article about the natural history of this amazing plant; go to: Corpse Flower.