Lava greets the sea in a swirling cloud of elemental forces

I already knew the answer I’d get, but I decided to ask the ranger at Hawaii Volcanoes National Park anyway:

“Where can we go to see lava flowing into the ocean?”

“You can’t. It’s on private property and it’s unsafe to go out there” she replied.

We went anyway, and had one of the most astounding experiences of our lives.

We were fortunate. Our first trip to the Big Island of Hawaii in May 2013 coincided with the awakening of Pele, the Hawaiian Goddess of Fire. She was sending small rivers of lava down the slopes of Kilauea to the sea, where they sizzled and exploded and steamed and hissed in anger at being awakened. We just HAD to see it, after reading about the experience and seeing photographs of the frequent eruptions over our lifetimes.

We had intended to walk out on our own, but there were some inter-cultural conflicts brewing at the time, and decided it would be culturally and physically safer to go with a guide. Aside from that, the lava beds we would have to cross were indeed on private property, so it was worth going with someone who had permission to pass. We planned a time when we could hike out in late afternoon so that we could see the lava flowing at twilight, then return in the dark, and signed up for just such a trip led by a guide from Kalapana Cultural Tours, a private company that had access to the area.

Our group gathered at the funky cluster of temporary buildings in Kalapana, which now consists of a bar and places to eat and listen to music out in the open. Kalapana was once a thriving little village, but an eruption starting in 1986 buried most of the town under lava, and eruptions in the area have continued sporadically ever since. Houses and subdivisions are no match for Pahoihoi lava. 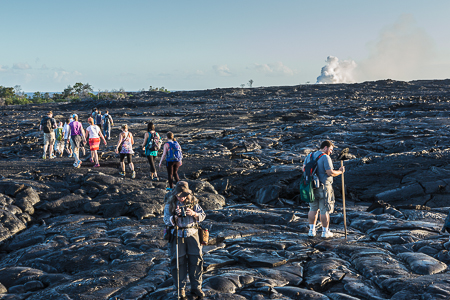 We started hiking in late afternoon across a lava plain; here we had our first glimpse of the billowing steam

We took a van to the trailhead, then struck off at a fair hiking pace toward the lava. We walked over hard ropy lava and rounded Pahoehoe lava in fanciful shapes, with the last sun of the afternoon glaring down above the slopes. There was no trail at all, so it was comforting to have a guide to lead us over the clanking plains of loose lava rock, not knowing where a river of melted rock might be lurking just below the surface.

The hike out to the cliffs where lava was flowing was roughly two miles over some of the roughest terrain imaginable. Our guide was a native Hawaiian from Kalapana who had lots of extended family in the area, and had stories of the lava’s impacts on village residents. We dressed in long pants, carried two quarts of water each, wore headlamps, took some energy bars, and carried extra batteries and a jacket in case of rain. Not everyone prepared so well. A lot of people wore shorts and were not well prepared for the rough terrain. Alas, most of them were young and resilient and carefree, so what did it matter? Actually, it does matter for some people; while we were in Hawaii, a photographer had a heart attack and died while walking with a friend on the route to see flowing lava. I think he found it harder than expected.

Hiking on lava was not difficult for us, since we are hikers from ‘way back. But we did have to be careful, since the rock was incredibly sharp. Karen used a hiking stick; I didn’t because I was carrying a tripod. Fortunately I didn’t fall, but one older lady in our group (actually, she was about our age) took a nasty stumble, and needed first aid for bloody scrapes on her arms and legs. Fortunately, we didn’t have to carry her out. 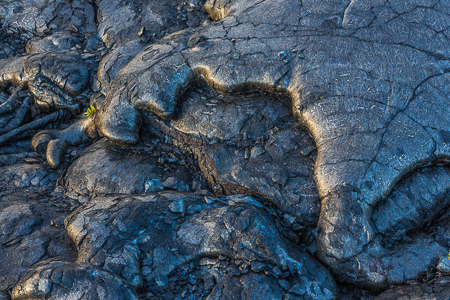 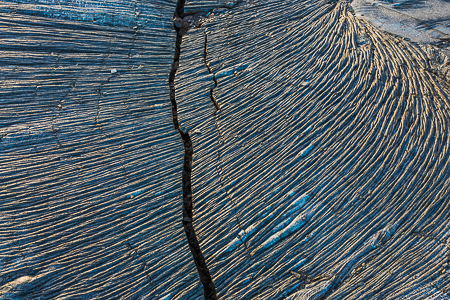 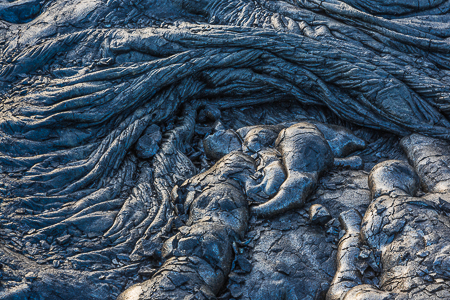 One aspect of hiking on lava was unexpected, and that was the sound of fragile shreds of lava tinkling underfoot–a sound that reminded me somehow of broken glass.

When we reached the overlook, there was a sensory explosion of lava hitting the sea. There was hissing and arcs of hot orange lava exploding within the steam cloud. Waves crashed into the decending stream of hot and dripping lava and a column of steam billowed up continuously. We wondered how far away from the lava a swimmer would have to be to avoid being cooked. All of us stood mesmerized by the sight, and I took hundreds of photographs, not wanting the experience to stop. It was simply astounding. 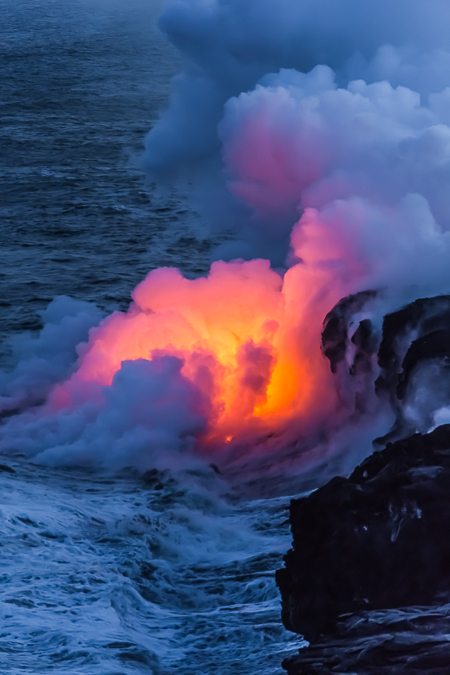 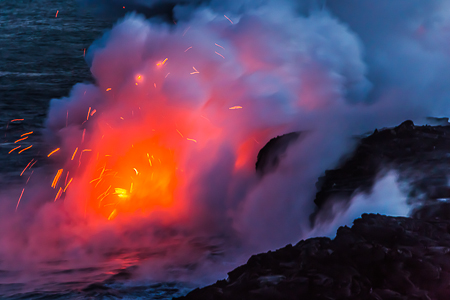 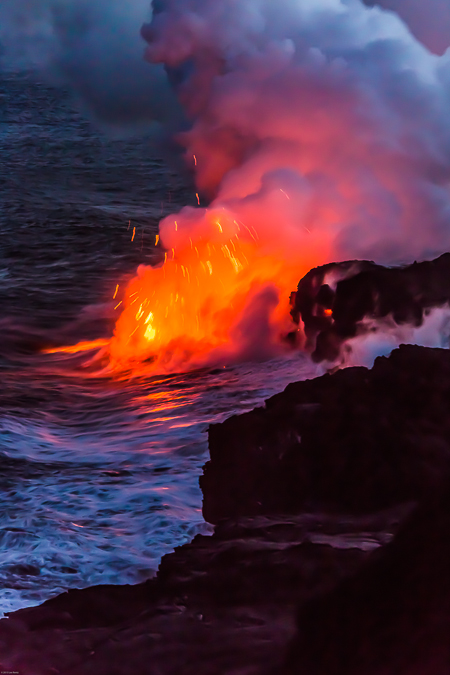 We stayed long enough that we watched early twilight blend into black night with an orange glow. The guide nicely asked me if I had gotten enough pictures, and I replied that I had, so he gathered the group and told us that on the way back he was going to look for a breakout–a place where a small stream of lava comes up through the older, hardened lava and starts oozing out in a bright tongue.

At the first location we stopped, we saw orange lava intermixed with cooled lava, looking like hot coals after a campfire. Then the guide spotted a place where a nature was sticking out a good-sized, Rolling Stones-style lava tongue at us. We walked over to experience the lava from just a few feet away and felt the elemental challenge of Pele. It was extremely hot, of course, and there was the uncertainty of just where it might break out next. At one point, I looked down and saw an orange glow in the narrow cracks just beneath my feet. THAT put me on edge, along with the intense heat of the place. Along with everyone else, I took photographs of Karen standing right in front of an oozing tongue of lava–which was a once-in-a-lifetime experience. 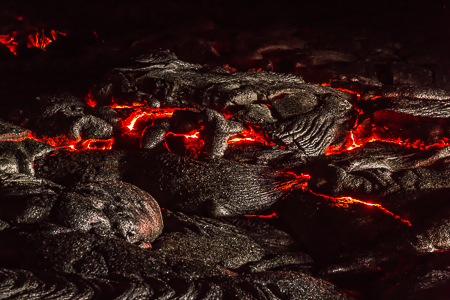 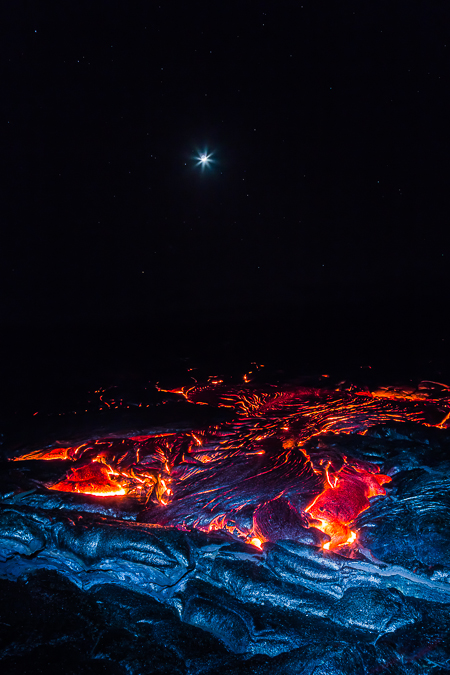 I took photograph after photograph during the hike back, riding on a hot cloud of elation at having experienced this earthly event. At times, I would be taking a photograph and Karen would be next to me, and the group would disappear over a rise. This made us both nervous, because with the danger of the area we really needed to stay with the group. But I needed to photograph. So we were endlessly conflicted. Eventually we would scurry along to catch up with the tag end of the group. 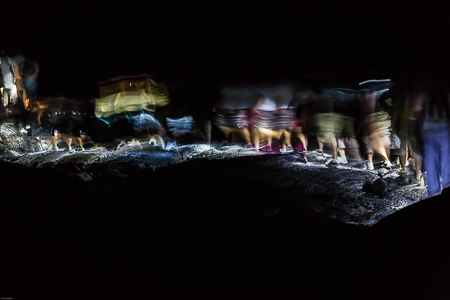 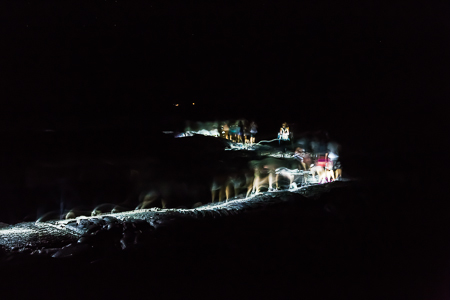 Our group hiking ahead, lit by flashlights and headlamps

Finally, our group’s headlamps found the van, and we boarded for the short ride back to Kalapana. It had been a magnificent experience, reminiscent of the eons of elemental forces that shaped the earth, and which continue to build the planet.

Volcano Update:  As of this blog post on 19 February 2014, there is no lava entering the sea. The National Park Service advises of the state of the current eruption at Hawaii Volcanoes National Park.