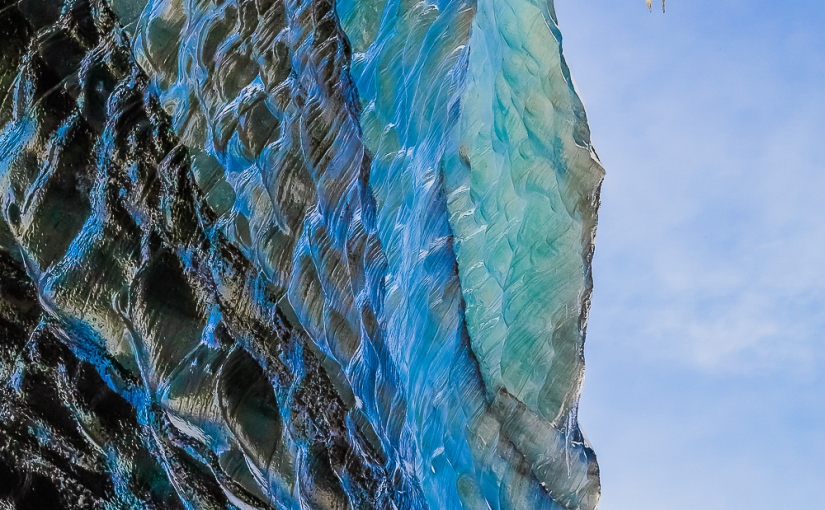 Thousands of years passed, blizzards howled over Iceland’s Katla Volcano in whiteouts that blocked out time and place. Uncountable snowflakes fell, dissolving the landscape. Immense compression squeezed the forming ice, forcing out air bubbles and creating a material of intense clarity and glacial plasticity. Gravity took over as the ice accumulated, and glacial ice flowed like a river that ignored time, down the volcano’s hidden ridges, scraping and sculpting the mountain, which was now hundreds of feet below the gleaming ice cap.

When we arrived at Kötlujökull glacier, a lobe of Mýrdalsjökull Glacier, we saw ice that was thousands upon thousands of years old. It ended abruptly at the glacial terminus, which was a sheer wall of ice over 100 feet high. Our small group entered a cave in the glacier, created by a flowing glacial stream and polished by air currents. These photographs represent the incredible sculpted and colored walls of the inner sanctum of the glacier.

We visited Iceland in March of 2018, with the intent of seeing the Aurora Borealis, which we did on three nights, and the South Coast, where these glacier pictures were taken. We also wanted to experience the Westfjords region in winter, which was also spectacular. We rented an all wheel drive Subaru so we could have more freedom of movement and spontaneity than a bus tour allows, and we stayed in modest AirBnBs to keep down the costs. Except for a couple of meals at restaurants, we ate simply, buying from small grocery stores (and Costco!). Our biggest splurges were for two guided ice cave tours, in which a driver and guide using a SuperJeep 4wd vehicle takes visitors to really spectacular places that would otherwise not be accessible. Well worth it!

Most of my work is available as prints on metal or cotton rag paper. To see a large selection of my work go to leerentz.com.