A day spent birdwatching for rare birds and seeing the hometown of Kurt Cobain. 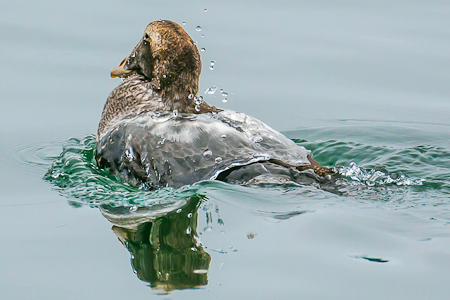 Like water off a duck’s back: Common Eider 1st year male in winter plumage bathing in the saltwater of Westport Marina; the last time I saw this species was in Oswego Harbor in Upstate New York some 30 years ago

Once in a while I get an itch to twitch. Which means I have to convince Karen that there are some rare birds to be seen somewhere within a 200 mile drive that we really should add to our life lists.

Twitching is the now widely-accepted term for going long distances on a moment’s notice to see rare birds–an activity that began in the land of trainspotters and other great eccentrics: Great Britain. The British Isles are small enough that twitchers can go anywhere in pursuit of rare birds. The passion quickly spread to other European countries and to the USA and Canada. I know people who will hop on a plane to go and see a rare species on the opposite coast.

Back in the ancient 1980s, twitchers used phone trees to notify each other about rare birds and where they were being seen. This evolved into recorded phone messages as “birding hotlines.” Then, in the mid-1990s, the internet was hatched and birders started posting messages about birds they had seen. Here in Washington State, the regional resource is Tweeters, a great name for an internet posting group that is hosted by the University of Washington. I have followed Tweeters almost daily for about 15 years, so that I can find out about birding hotspots. Other regions have similar informal groups, where people can get emails of all the postings about birds. When smart phones became widely adopted, birders started posting about birds in real time from the field, and using apps to broadcast bird calls to bring in target birds (to some controversy). It has gotten exciting to be a birder in these technological times!

Anyway, word got out on Tweeters that Grays Harbor was suddenly hosting a variety of rare birds in late October, including a Northern Wheatear, Common Eider, Wilson’s Plover and several others. Of these, the Wheatear and Eider are usually Alaskans, while the Plover normally calls the Mexican and Gulf coasts home. They apparently decided to meet in the middle for a discussion of the changing climate.

Grays Harbor is often a terrific birding destination; last winter, Damon Point State Park, a sand spit that sticks out into Grays Harbor, was where a dozen or more Snowy Owls escaped the Arctic cold and spent a mild winter. The marina at Tokeland is a great place to observe over a hundred big and gangly shorebirds roosting and feeding together; these Marbled Godwits have wintered in this remote location for years.

Still more rarities have been seen around Grays Harbor lately. There was a Northern Mockingbird at the Tokeland Marina–way out of its normal range. A Tropical Kingbird was sighted at the Hoquiam Sewage Treatment Pond. Now, if you are not a passionate birder, the idea of staring intently through binoculars at a sewage treatment pond might seem a bit odd, but those of us who are truly odd don’t find it weird at all. Last Christmas break, Karen and I took Karen’s mother (on her birthday!) and father to see Snowy Owls at the Muskegon Sewage Treatment Facility in Michigan. It made for an “interesting” and aromatic day; but we did see the owls and enjoyed an aromatic picnic lunch at the facility, with a nice view of masses of gulls at the adjacent landfill mountain. 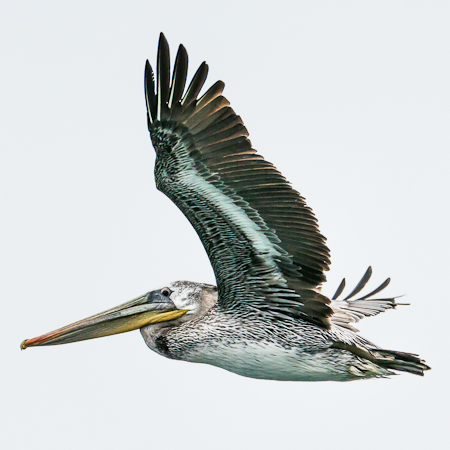 Back to Grays Harbor: we got to Westhaven State Park in Westport by 10:00 a.m. This is where the Northern Wheatear was being seen. I asked Karen to look for Subarus in the parking lot, as that would be a good indicator that Seattle-area birders were looking for the bird. Actually, the parking lot was almost full. In addition to all the older birders (including us), there were lots of surfers, kayakers, and dog walkers at the state park. We walked up a dune to where people were intently watching a jetty through spotting scopes, and found the bird. It was hyperactively foraging at one end of the jetty, and apparently did that continuously. We rarely saw it pause. To add to the fun, there was a Palm Warbler feeding among driftwood on the sand. The last Palm Warbler I had seen was in Michigan’s Upper Peninsula, where one was flying up to within a foot of my face and grabbing the black flies that were hovering there and making me miserable. I wasn’t able to photograph the Wheatear, as it vamoosed when we were approaching photographic range. Others were successful in photographing it, as some of the posts on Tweeters show.

We spent the rest of the day searching for other birds. We had great views of the behavior of the Common Eider as it dove and caught Dungeness Crabs in the Westport Marina. We dipped on the Wilson’s Plover: okay, I need to backtrack here and talk about British birding again. “Dipping” is another British birder-originated term for when you don’t manage to see the bird that you just drove 200 miles or flew 2,000 to see. It is discouraging, but it happens. We decided not to go look for the Tropical Kingbird at the Hoquiam Sewage Treatment Pond because it was getting late, it was raining, and we are wimps. 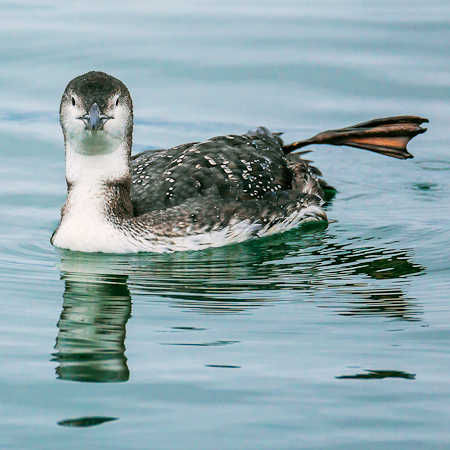 Near the end of the day, we drove a road through the cranberry farms near Grayland, and enjoyed seeing some the harvest, including huge bins full of fresh cranberries. There is an informative auto tour that you can take, and the guide is available online at Cranberry Bog Tour. There are also opportunities in the Westport Marina to take a chartered boat out for Halibut fishing during certain times of the year, as well as lingcod, salmon, and albacore tuna fishing. Pelagic birding trips are also available occasionally, where birders can see ocean-dwelling species that are otherwise hard to see. 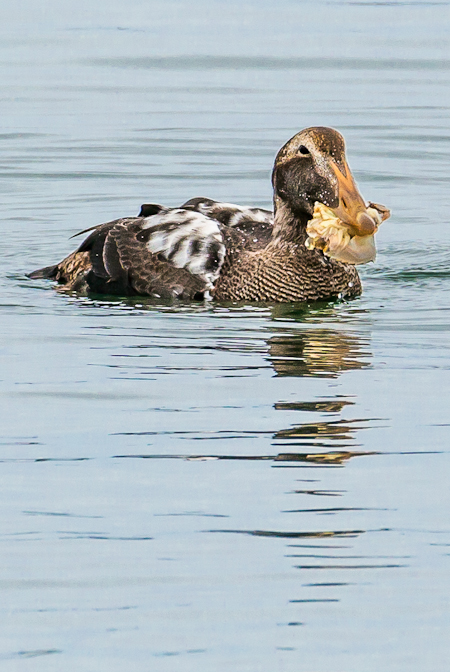 This Eider of the Arctic adapted well to Grays Harbor, where it repeatedly dove and caught Dungeness Crabs in the Westport Marina 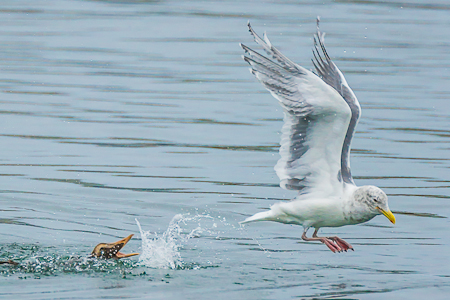 The only problem for the Common Eider was that a gull repeatedly hovered over it when it came up from a dive, and in this case successfully snatched the eider’s crab; the enraged eider then attacked the pirate, to no apparent success

Grays Harbor is famous for an entirely different reason. I was reminded of that when driving past the “Welcome to Aberdeen” sign that had a tourist slogan attached that said “Come as You Are.” I did a double-take at the sign and drove back to photograph it when I realized its subtle double meaning. Aberdeen is the small mill town and harbor on Grays Harbor where rock star Kurt Cobain was born and lived much of his life. “Come as You Are” was one of his great 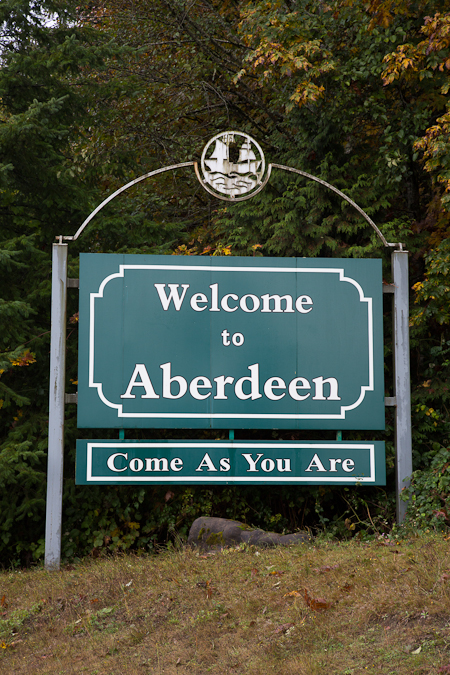 songs, and a fitting memorial to him and his band, Nirvana, in a town that largely ignored his huge cultural contributions for many years. As an older guy, I considered his grunge style to be just noise for many years; lately I’ve started enjoying his music. I’ve always been slow to adapt new styles, though I was right in synch with the grunge era in my appreciation of old flannel shirts. Perhaps I’ll get a tattoo next … maybe of a Northern Wheatear (actually, in Portland recently I saw a young woman whose arms were covered with bird tattoos; I guess she took to heart the Portlandia slogan: “Put a bird on it!” 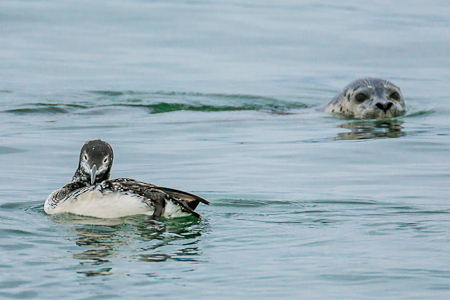 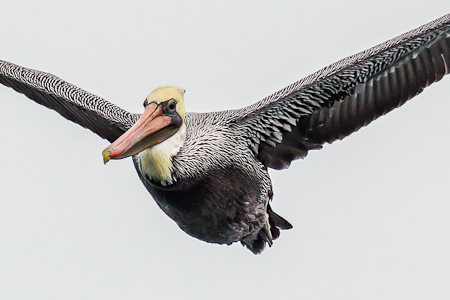 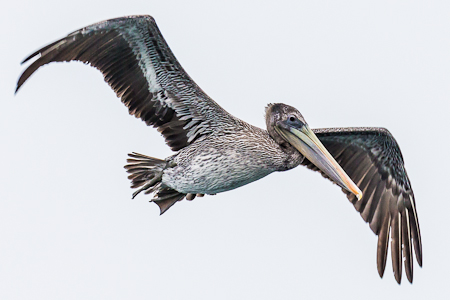 Yeah, I believe that birds evolved from dinosaurs!

Common Eider motoring to its lunch spot in the Westport Marina 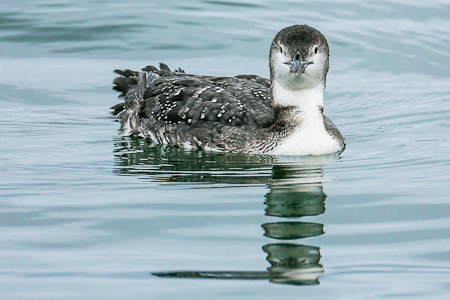 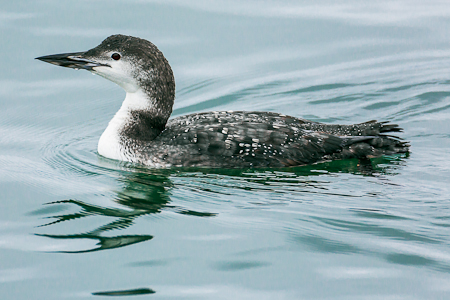 Marinas in Washington State are among the best places to closely observe loons; they are accustomed to seeing people and are relatively approachable with a camera from the docks 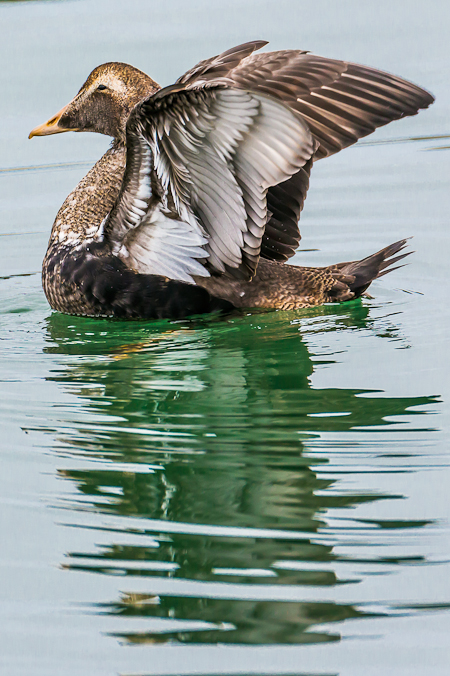 Common Eider flapping its wings to adjust feathers after preening