A rural field near Shanksville, Pennsylvania, is the site of the Flight 93 crash during the events of September 11, 2001. The Flight 93 National Memorial is a sacred place for remembering the heroism of that day.

Mennonite women viewing the folk art angels commemorating the souls who died in the Flight 93 crash. The actual crash site is in the far distance on the right in this scene. You might be able to see the distant flag.

Rare shared moments in our lives are seared into our brains.  On September 11, 2001, I awoke on a warm late summer morning to the voice of Carl Kasell on NPR, saying there were reports that a plane had hit the World Trade Center in New York.  Almost immediately came reports of a second plane hitting the other tower, and all hell broke loose.  Our lives were never to be quite the same again.

Six years on, I was in Washington D.C. on September 11.  Leaving town, I drove north into Pennsylvania toward Pittsburgh; somewhere along the  road, it struck me that I must be following roughly the path that the fourth plane hijacked by the terrorists would have taken toward Washington D.C., only in reverse. I stopped, looked at a map, and determined that I could stop for a day at the field where United Airlines Flight 93 crashed into the ground, ending the lives of all aboard.

I drove through the beautiful Pennsylvania countryside that day, enjoying the touches of autumn, covered bridges, pastoral farms, and small towns that have remained much the same for decades. Near Shanksville, I followed signs to the Flight 93 site.  When I arrived, there were a few scattered cars and Harleys, as well as a tour bus filled with Mennonite men and women on an outing.  The place was quiet, except for the American flags flapping in the brisk and chill wind.

Mennonite ladies pause to view a collage of heartfelt tributes to the heroic passengers and crew of Flight 93.

Every American alive on 9/11 knows the stories of that day, but it was with a sense of awe, wonder, and sorrow that I relived the tragedy and heroism of that day in this sacred place.  Flight 93 was heading for San Francisco from Newark.  It got a late start, but the flight looked smooth on this beautiful day for the seven members of the flight crew and 37 passengers. Over Ohio, 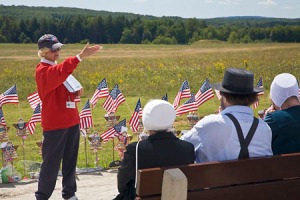 the four hijackers made their move in the first class cabin.  They incapacitated the pilots, took control of the plane, and turned back toward Washington D.C.  By this time the passengers, talking on cell phones to family and friends, learned that three planes had already hit their targets and their plane was to be the fourth.  They probably didn’t know it, but the target was to be the White House or the Capitol Building.

From their cell phone conversations, we know that the passengers voted to try and retake the plane.  Todd Beamer has become the most famous of a group of men who hatched a plan and launched a counterattack.  The black box recording of the cockpit provided evidence that the counterattack was effective in thwarting the plans of Al Qaeda; the terrorist pilot ended up diving the plane straight into a reclaimed strip mine field at over 500 miles per hour.

Everyone died instantly.  You can review the events of the flight at http://www.nps.gov/flni

We know there were heroes that day, and when I stood on that sacred ground I could feel that heroism in my very bones.  Spirits inhabit the place and every visitor is quiet and reverential.  Few places evoke so many quiet tears.

Visiting Americans have left thousands of remembrances: crosses, flags, notes of admiration, motorcycle club patches,firefighter memorabilia, and so many other items are collected on a memorial wall.  Volunteers from the area provide heartfelt interpretation of the events of that day. 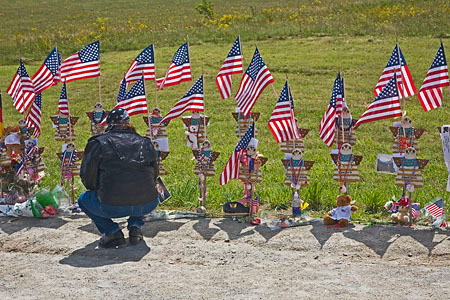 A reverential biker views the names of the passengers and crew.

Visitors are not allowed on the actual crash site; that is reserved for family members of the crew and passengers.  The crash site is visible from the hill where the memorial is located.  As of this 2009 writing, there is a temporary memorial; soon there will be a permanent memorial building and exhibits run by the National Park Service.  The website I linked to above has extensive information and graphics concerning the design of the permanent memorial, which will be a reverential reminder of the events of the fateful day.  In addition, there is a website where you can learn about donating to the memorial, and get another narrative of the events of the day.  Go to: http://www.honorflight93.org/ 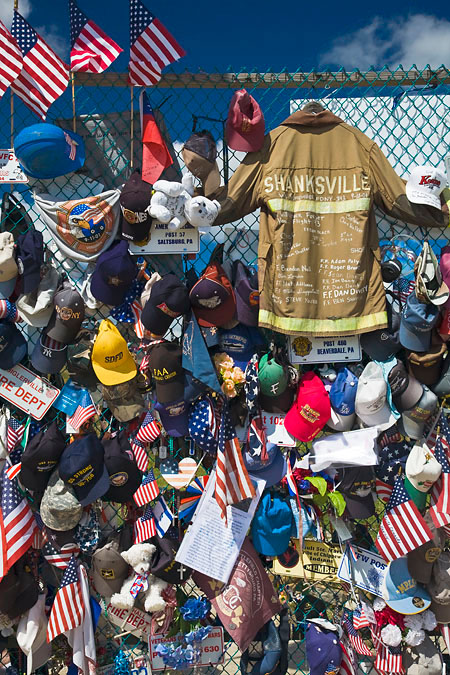 I came away with a sense of pride that Americans had the courage to take the course of events into their own hands that day.  It is among our proudest moments as a nation.