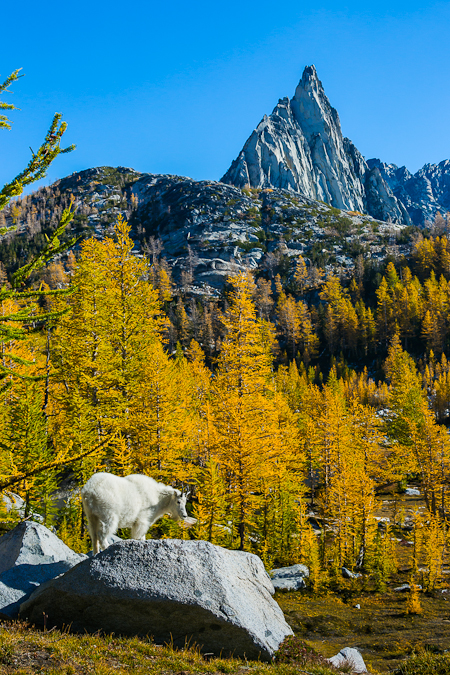 The magic of The Enchantments in one photograph: a Mountain Goat, golden Alpine Larches, and Prusik Peak on a flawless October morning 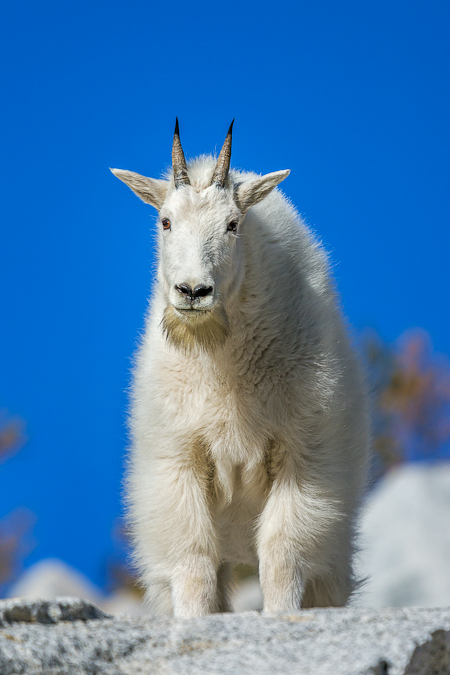 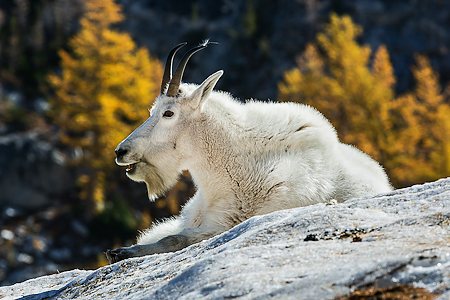 Mountain Goats shared our campsite with us each day; this nanny is chewing her cud while relaxing on a snow field, with golden Alpine Larches in the distance

When we awoke on the third morning, one of our companions said “Hey, everyone; there are Mountain Goats out here!” We quickly donned warm layers and grabbed camera gear, then scrambled out of the tent. A nanny and her kid were just outside our tents, and appeared to be waiting for something. A playdate, perhaps, just like a meeting in Green Lake Park of the nannies and kids of Seattle’s high tech wealthy? I’ll get to that later; but for now the wonder of the experience of being so close to these wild creatures was awe-inspiring. 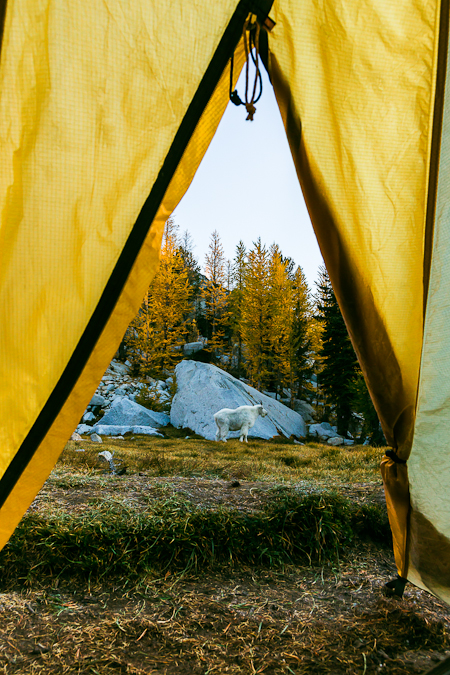 Looking out the door of my tent, with a Mountain Goat in the meadow 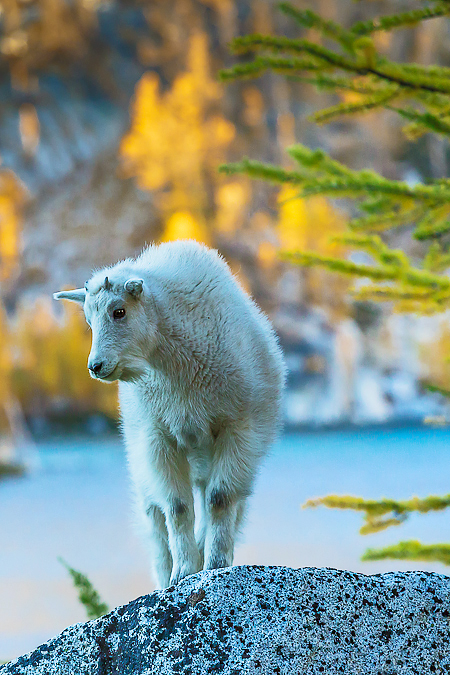 A young Mountain Goat, just sprouting its horns, standing on a granite boulder with Perfection Lake behind 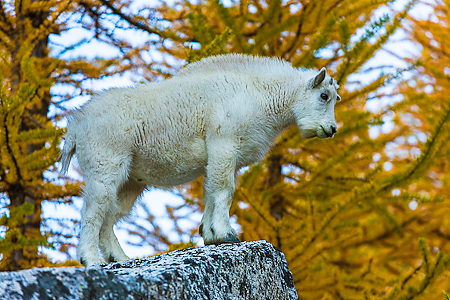 A Mountain Goat kid often stands on boulders, testing its climbing ability and keeping an eye on Mom

The kid also enjoyed grazing on sedges in the subalpine meadow, but he spared the beautiful gentians (something about them tasting like broccoli!)

The kid was adept at climbing boulders and clinging to steep rock faces where I wouldn’t venture. This early practice gave the little guy–and he was a guy, according to one of the human female members of our merry band of hikers–good preparation for the long winter ahead, when all the humans are long gone from the high country, snow is twenty feet deep atop the frozen lakes, and the winds begin to howl. During that time, the nanny and kid will be high on the cliffs of The Enchantments, using their best tool–their flexible hooves–to cling to sheer faces and dig for dried sedges and other bits of nourishment. It must be a hard life. But these high cliffs are blown almost free of snow by the wind and by their very steepness, which means there are ledges nearly bare of snow where the goats can scratch out a living.

At least the goats stay warm all winter. Their long hair makes a great insulator, and if they can eat enough food, the bacteria in the gut actually keep the animal warm–much as a compost pile’s bacteria heat the whole heap. 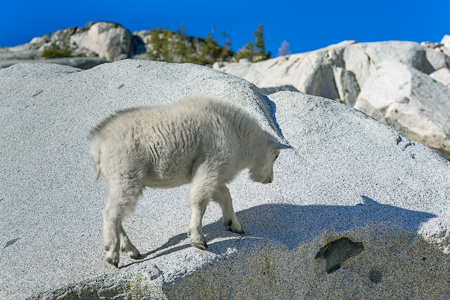 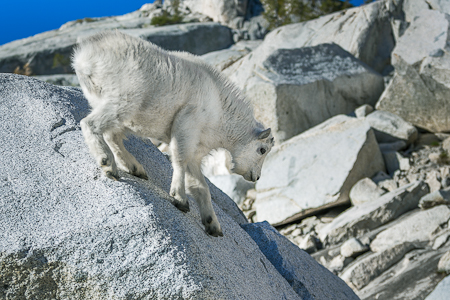 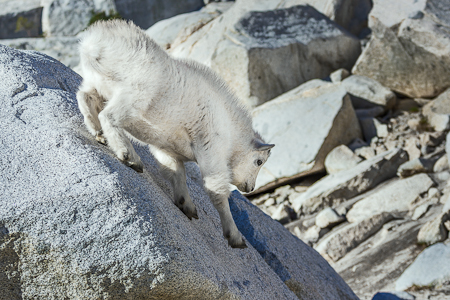 In the above sequence of three photographs, the kid walks atop a boulder, then descends a steep face of it  with confidence in its maturing abilities 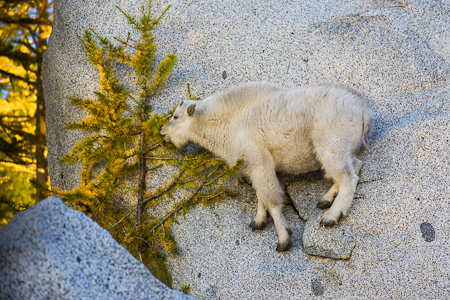 The kid is a natural-born rock climber, able to cling to the nearly vertical side of a boulder while browsing the tasty needles of an Alpine Larch 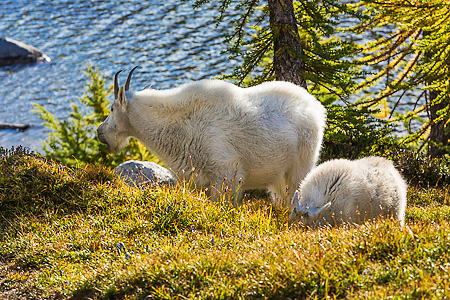 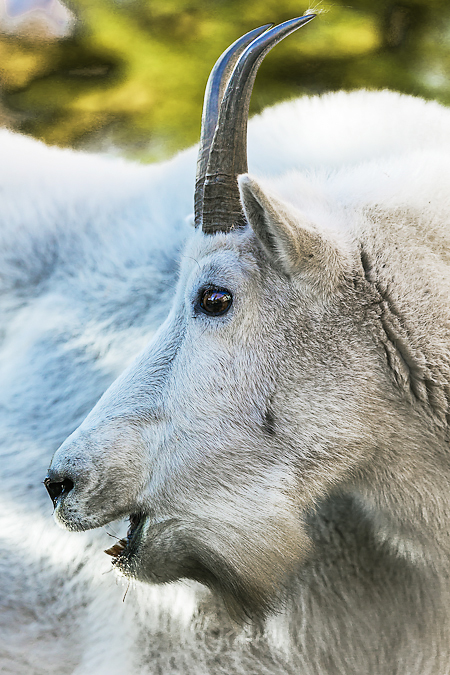 Nanny Goat photographed while chewing or talking, or both 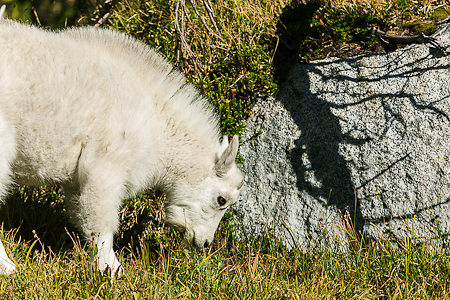 Kid grazing a meadow near an Alpine Larch shadow; note the stiff hairs that stand erect along the youngster’s back

Nanny goat wasn’t entirely motherly by human standards. If the little kid got too close while she was feeding, she would give it an aggressive thrust of her head and wickedly sharp horns, and the little kid would back off, seemingly with an expression of “What did I do wrong?” This behavior would serve the little guy well in the future, as there is a hierarchy of dominence among all the bands of goats, and everyone is more content if they know where they belong in the workplace pecking order. 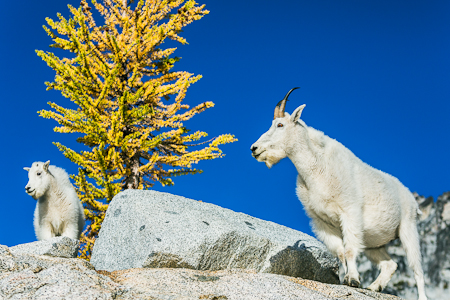 Nanny and kid alert to our activities

One morning a band of five female nannies and kids wandered down the mountain into our campsite, where they joined our regular two residents. I’m sure that the regulars and newcomers already knew each other quite well, but just to remind each other just who was the queen and who were the commoners, there was plenty of staring and glaring and thrusts of those deadly horns. Eventually the newcomers moved on, and our regular nanny retained the title of Queen of our Campsite. 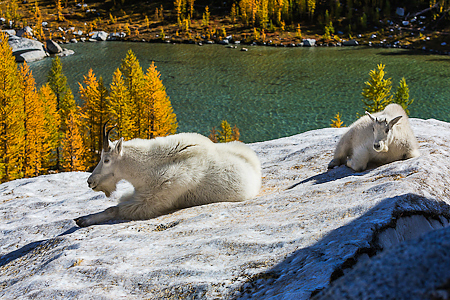 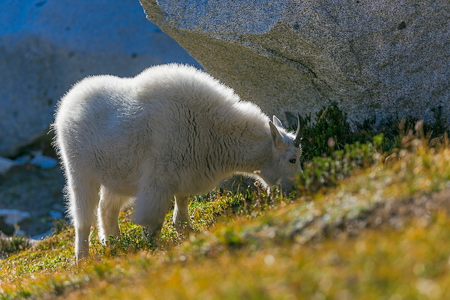 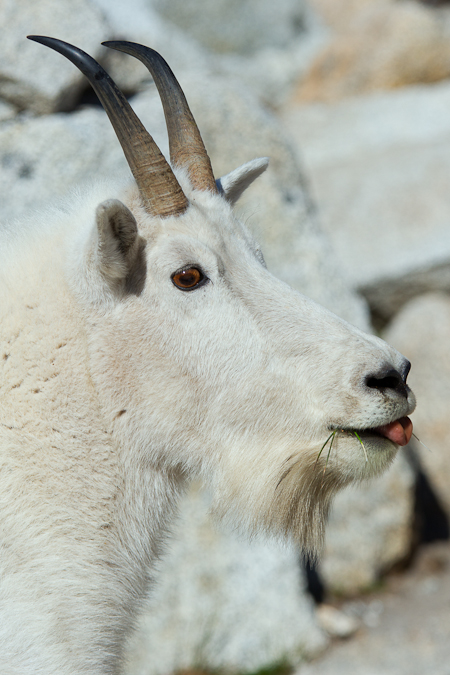 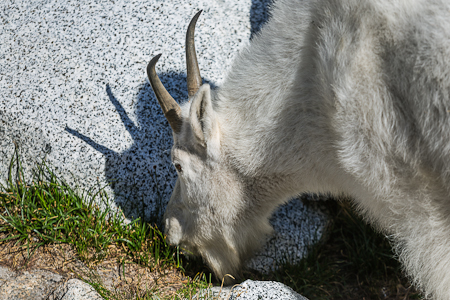 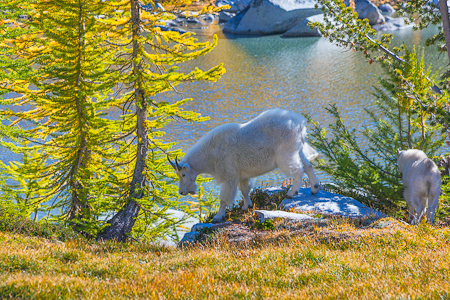 Mom and son at the edge of Perfection Lake 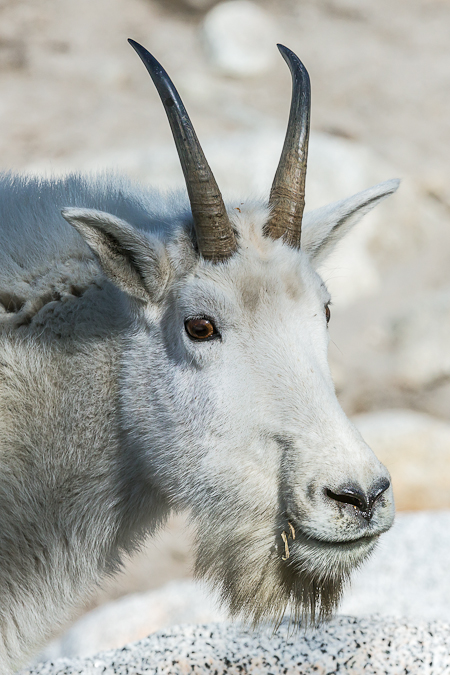 Close up and personal

By the way, I said at the beginning of this weblog that I would explain why the Mountain Goats camped with us for four days. I would love to say that it was because they enjoyed our companionship, or that they perceived that they were safer from Mountain Lions when they stayed near us. The truth is much more prosaic and much, much grosser.

You see, Mountain Goats love salt. They are addicted to salt. They dream of lapping the great salt lick in the sky. To them, humans are simply a mobile source of salt. I remember talking to a young female employee in Glacier National Park years ago when I worked for the National Park Service, and she described how Mountain Goats would walk up to her, when she was hiking in summer shorts, and lick the sweat off her bare thighs.

But wait, it gets worse. Mountain Goats have also come to associate people with another source of salt: human urine. Truth is, we all gotta pee, and the goats seek out the places we peed in order to lick the salty fluid from the granite or eat the soft soil saturated with golden liquid. That, and that alone, is the reason they hung around camp.

And on that note, I’ll just say that, whatever the reason we had the company of Mountain Goats, we sure enjoyed them. We enjoyed them even more when they were grazing sedges in the meadows, browsing larch needles, or chewing their cud while resting on a snow field–behaviors that seem seem more natural than following hikers to a private spot. 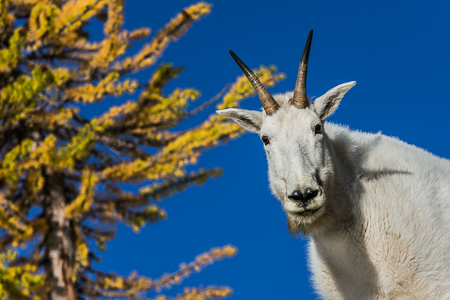 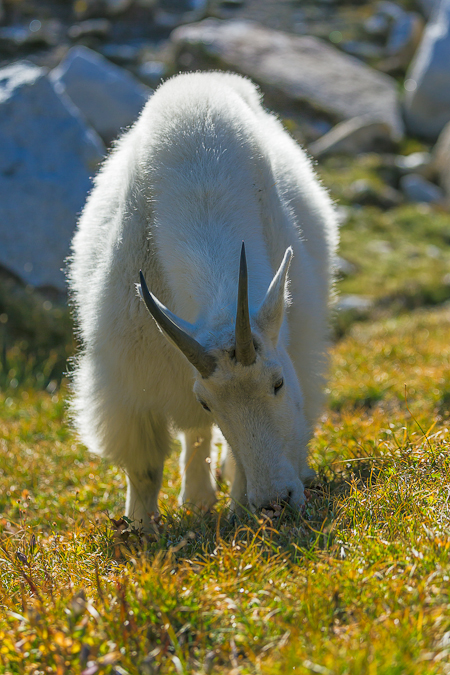 The most readable account I’ve read about Mountain Goat behavior is A Beast the Color of Winter: The Mountain Goat Observed, by Douglas H. Chadwick