A simple seaside cottage in Mendocino, with the blue Pacific distant

I first heard of Mendocino two years after the Summer of Love brought tens of thousands of hippies to San Francisco. In the spring of 1969 I drove west from Michigan in a bright red Opal; I was heading to California for a summer of fighting forest fires. At a campground in Nevada, a friendly fellow camper came up to me and told me all about how he had “dropped out” of society and was currently part of a small theater troupe in Mendocino–a place I had never heard of. He had a hippie van and long hair, and I asked him if he regretted dropping out. He said “Lord no!” and seemed amazed that I would ask the question.

Two years later, my wife-to-be and I went to see a movie in Ann Arbor, where we were in college. The Summer of ’42, a sad and romantic tale about a young woman who lost her sailor husband in World War II, had a character even more beautiful than the star, Jennifer O’Neill, and that was the lovely village of 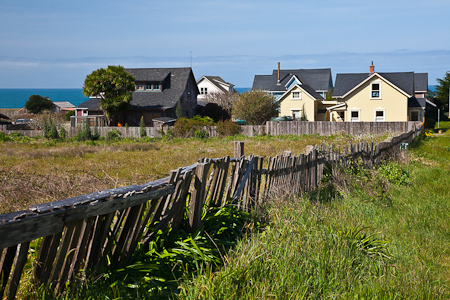 Mendocino. Perched on cliffs above the blue Pacific, with flowery meadows, weathered picket fences, and lovely old wooden homes, the town seemed like the perfect American village–the kind of small town we admire in our collective imagination.

During the summer of 1973, my young wife and I went to California, where we spent a five month summer camped under soaring Douglas Firs, with me fighting forest fires for the U.S. Forest Service. During some days off, we took a trip to Mendocino and had a chance to experience this lovely village first-hand. 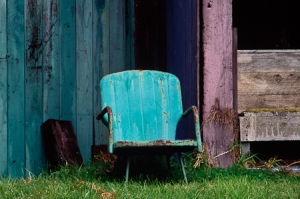 We didn’t realize it until then, but Mendocino had been something of an artists’ colony since the 1950s, and I remember buying a piece of earthy stoneware that was innovative for the time. There was also a bookstore that had lots of wonderful do-it-yourself manuals inspired by the contents of the Whole Earth Catalog, which was the closest thing to the internet that we had back then. I remember leafing through some books about building your own house, but realizing that I didn’t have any talents for building a house. But plenty of hippies of the time did, and ramshackle houses sprouted along with marijuana crops back among the Redwood groves in the endless ridges and steep valleys of the Klamath Mountains. Those remote wildlands became one of the eminent pot-growing regions of North America, for better or worse. As we drove through the area, I recall singing lyrics from a Gordon Lightfoot song about the footloose wanderers of that era: “If you’re drivin’ east to Reno, or north to Mendocino, I hope you find your rainbow’s end …” (from the 1971 song Cabaret).

I returned to Mendocino while attending college in Utah during 1975. An “Animal Communities” class I was taking, taught by esteemed ecologist Dr. James MacMahon, did transects (straight lines where a biologist records data on plant and animals observed) recording animal life from the shore and out

into the ocean, so that those of us living in the mountains of Utah could have a sense of the structure of an entirely different kind of animal community. It was fun to see an octopus and sea stars and all the other varied tidepool life. The rocky beaches of Mendocino are incredibly fecund; naturalists can see Gray Whales migrating offshore; Harbor Seals and California Sea Lions basking on rocks; seabirds nesting on the offshore rocks; and all the wonderful invertebrates that occupy the tidepools. I recall driving through town, and it didn’t look like much had changed.

By the late ’80s, established in a career in Upstate New York, I was a long way from Mendocino, but once in a while the little village would show up unexpectedly in the media. Murder, She Wrote was the prime example. Set in 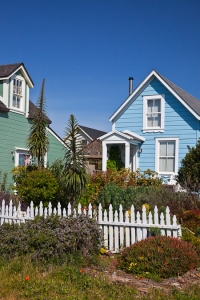 Cabot Cove, Maine, the mystery series starring Angela Lansbury was actually filmed on the left coast, featuring Mendocino as the fictional Cabot Cove. Since Mendocino was founded by New Englanders, it had that look and feel. Residents of the little town enjoyed the occasional on location filming visits from Ms. Lansbury and Tom Bosley, and sometimes locals were hired as extras for the series. One home that is currently a bed-and-breakfast, Blair House, became Jessica Fletcher’s home in the series.

By the early 1990s, I had switched careers and became a photographer. My photographic travels took me to Mendocino one spring circa 1992, where I was enchanted once again by the early American coastal architecture. By the early 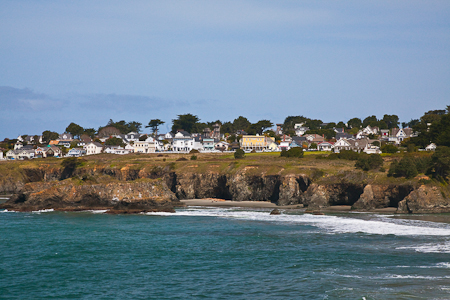 1990s, yuppies had displaced hippies, and the town had a different feel. Art galleries were marketing more to people with money, and the gallery scene was big in town. The VW bus I was driving seemed like an anachronism in a place now dominated by Lexus and BMW cars drivien by the tourists. I wandered around town with camera and tripod, thinking again what a lovely place this would be to live if I could afford it, which I couldn’t.

A flowery path and a water tower among the Victorian homes

Nearly 20 years then went by in the blink of an eye, until I next had an opportunity to visit Mendocino. My old VW van had burned in a highway fire years ago, and my hair was grayer and shorter, but I still liked the look of the town–which has remained almost identical through all these years thanks to

the officially designated Mendocino and Headlands Historic District, which carefully limits what owners can do with their property. In those 20 years, the shops that went from hippie to yuppie had now transformed again. The art galleries were fewer, having been displaced by nail and hair salons, an organic coffee shop, and more higher-end clothing boutiques and jewelry shops–all representing what I’ll call the “California Me” style, in which personal indulgence has become the accepted norm. There are undoubtedly hippies still out in the woods growing pot, and I’m sure that high-tech and banker yuppies 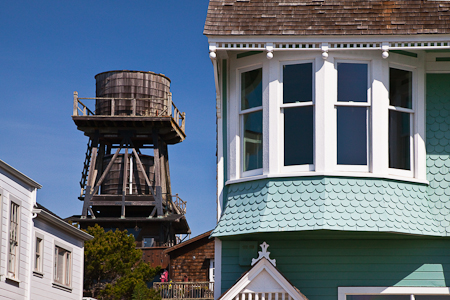 who made fortunes during the bubble eras have second homes in the area, but the typical tourist these days is someone with the personal funds to enjoy a lovely bed-and-breakfast, and spend the days visiting wineries and brew-pubs, shopping in boutiques, and enjoying other indulgences. Once again times had changed.

And times will continue to change. I’ll probably return to Mendocino in a decade or so, if I am lucky. What changes in American and Californian society 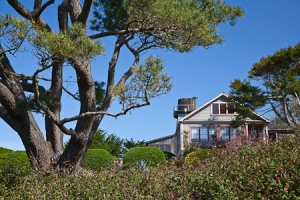 can I expect to see on that next visit? More gray-haired people? Undoubtedly; after all, that is the trajectory of my baby boom cohort. A new dominance of electric cars? A sudden influx of craft whiskey and vodka distillers?  Vast lavender farms to equal those of Provence? State sales of the headlands to developers in order to raise money for California’s beleaguered government? Hopefully not the latter …

Times change; fashions come and go; and some of these changes are reflected in this remote, offbeat village. Fortunately, the look and feel of Mendocino has remained relatively unchanged in the whirlwind of bigger changes that blow through American life. The unchanged look of this charming little village perched on the edge of the Pacific Ocean is an anchor in the storm of change sweeping America.

Calla Lilies along a picket fence in this quaint village

Main Street in Mendocino is a collection of cute shops 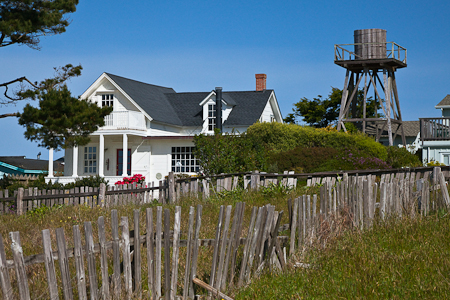 A beautiful home, undoubtedly occupied for over a century

For those who think American small towns died soon after “It’s a Wonderful Life” was filmed, it’s a surprise to see that there are beautiful small towns all over the Midwest that look for all the world like Bedford Falls.  These towns have two or three story well-proportioned brick buildings lining Main Street, and these days the drygoods stores and mom-and-pop groceries of a hundred years ago have been replaced by antique shops, styling salons, and lawyers’ offices.  In many cases the old storefronts have been restored to something near their original look, and the space-age aluminum facades of the 1950s and 1960s have been removed.

I visited two such towns this week:  Marshall, Michigan and Madison, Indiana.  In each town I gave myself the assignment of walking around town for an hour or so and seeing if I could come up with any interesting pictures that would help illustrate life in these quaint places.  I used a camera with one lens and a polarizing filter, and to keep it spontaneous I chose not to use a tripod.  You can see my favorite results in the gallery below.

This is part of a weblog documenting my travels and photography. I am primarily a nature photographer, and you can see more of my work at http://www.leerentz.com