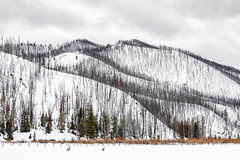 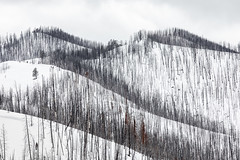 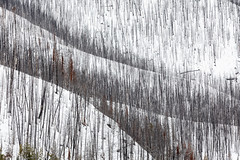 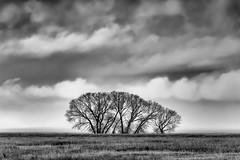 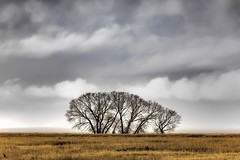 The Iron Goat Trail leads through the magnificent ruin of an all-concrete snow shed along the now-abandoned high route over Stevens Pass (now replaced with a lower route, less prone to avalanches, over the same pass)

“I was journeying to Seattle from Spokane, planning to visit my sister who lives on an island in Puget Sound. It was nippy when we left Spokane, but the cold was bitter when we reached the Cascade Mountains. As we climbed toward Stevens Pass, the snow was falling steadily, and at the pass it was accumulating on the tracks too fast for the rotary snowplows to keep up. We got to the Cascade Tunnel, and were safe from the falling snow inside the tunnel, but when we emerged on the other side at the little town of Wellington, it was a full-fledged blizzard and the conductor said that we were going to have to wait for the snow to subside before the train could leave the station. We stayed warm enough in the train while we waited for an endless two days. There was enough food, but the snow kept falling. Some of us thought it might be safer if the train could back into the tunnel, but the conductor said that we could be poisoned from the train’s smoke, so the train remained stopped outside.

Finally, the snow stopped late in the day on February 28. Later that night we awoke to a rare winter storm with thunder and lightning. The temperature was suddenly a great deal warmer. I was sleepy, but I could tell that something wasn’t right because there was a loud roar outside. Then a wall of snow hit us hard, and pushed the whole train off the tracks and down the mountain. It was as horrid as can be; passengers were screaming and flying through the air and slamming into walls and the ceiling as the train tumbled down. I hit my head and passed out, so I didn’t even realize that the broken passenger car was now covered by snow. Two hours later, I was pulled from the wreckage by three men; I was colder than I have ever been, but the men said I was lucky just to be alive.”

From the journal of  Lucy Annabelle Wiggins

(a Victorian lady, born in England, emigrated to America in 1893, and real only in the author’s imagination)

Interior of the Windy Point Tunnel

The Great Northern Railway tried to make first the Stevens Pass route over the Cascades work well, they really did, but the mountains of Washington are prone to tremendous snowfalls followed by rain. When the rain saturates the accumulated snow, the cold, wet mass gets too heavy for the slope, and an avalanche is possible.

On the night of March 1, 1910, 96 people in two trains died in the Wellington Avalanche, which was triggered when lightning hit a snowy slope high above Wellington. Most of the bodies were not recovered until snowmelt the following July. Only 23 passengers survived, in the greatest natural disaster ever to hit Washington State in historic times and among the worst train disasters in America.

After the disaster, the Great Northern decided that they needed more snow sheds along the route. Snow sheds over the tracks provide a way for avalanches to pass right over the tracks without hitting the train. They even built a high-tech (for the era) all-concrete snow shed that was nearly half-a-mile long. With all the snow sheds and tunnels on this route, travel became safer, but the entire route was abandoned in 1929 upon completion of the 7.8 mile long Second Cascade Tunnel down along the river.

Trees have now grown up along the old roadbed of the Great Northern; this section of track was abandoned in 1929

Time wore on. Timbers rotted in the wooden snow sheds and roofs collapsed. Douglas Firs and Western Hemlocks and Grand Firs grew up along the old roadbed. Rockfalls and avalanches covered the old route with debris. The village of Wellington, later renamed Tye to avoid association with the avalanche, burned down after being abandoned by the railroad. Traces of the old forest fire and clearcut above Wellington–which had contributed to the deadly avalanche–gradually absorbed back into the forest. Souvenir hunters made off with artifacts. The place was quiet, haunted by the terrible event of 1910.

Avalanches still regularly occur here; this is the remnant of a small avalanche, one of several we saw on our hike

This collapsed wooden snow shed, hardly recognizable as such, is extremely dangerous to walk on

Then, in the 1980s, the Volunteers for Outdoor Washington, working with the U.S. Forest Service and other organizations, began work to create a trail along this route. The Iron Goat Trail, named for the iconic Mountain Goat logo of the old Great Northern Railway, is now among the best historic trails in Washington State. As a railroad buff since I was three years old, I was thrilled to hike this trail and see the old roadbed, tunnel portals, and snow sheds. There were even a couple of remnant avalanches still melting out along the route to remind us of the terror that still lurks along these slopes during the long, snowy winter.

The Windy Point Tunnel opened in 1914

The following photographs are a gallery of the ruin of the all-concrete snow shed, which was truly an amazing architectural accomplishment and which is now an exquisite ruin

One end of the all-concrete snow shed is deteriorating; note the heavy rebar used for reinforcing concrete a century ago

A replica of an original milepost of the Great Northern Railway, showing the number of miles from where the railroad originated in St. Paul, Minnesota

Portal for the First Cascade Tunnel, near the town site of Wellington; the tunnel is now closed to hikers because of dangers of collapse

Inside the Windy Point Tunnel looking east, with two humans for scale

Bears also enjoy this trail; here a Black Bear has used claws and teeth to scrape nutrient-laden tissue from the inner bark of a fir tree

This is the best logo ever designed!

For more information about access and history, go to the following web sites:

The web site for Lee Rentz Photography, which includes an archive of tens of thousands of photographs as well as photographic prints for sale or license, please go to LeeRentz.com