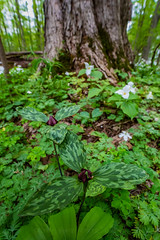 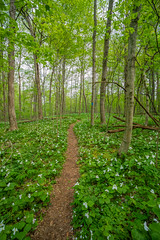 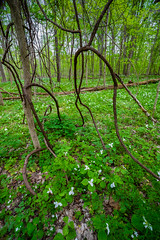 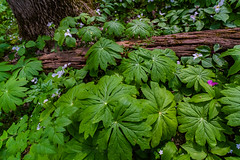 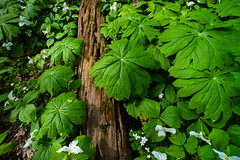 The Dungeness River rushing through the forest

Our weekend backpacking trip led into Olympic National Forest, located on the Olympic Peninsula west of Seattle. This is a lush place, with mosses and every shade of green, as well as a river tinted aqua with glacial flour. It is also a place of silence, where the occasional sounds are the rushing of the river and the dreamlike songs of Hermit Thrushes high in the towering Western Hemlocks and Douglas Firs.

Our hike took us about three miles in, where we set up our tent at Camp Handy. The next morning, we hiked up 1,800 vertical feet to Boulder Camp, then later hiked back down to camp, packed up, and hiked out. Rather that give a sight-by-sight account of the trail, I’ll let the pictures speak for themselves.

I would, however, like to give a shout out to all the Dads who took their families backpacking on Father’s Day weekend. At Camp Handy, there were four other groups in addition to Karen and me. One was a Dad with a teenage daughter, who stopped and chatted with me about where his daughter could learn photography. The second were two men with four young daughters. The third were two men with two young sons. And the fourth was a father with a pre-teen daughter.

This was wonderful that all these Dads were teaching their daughters and sons about backpacking in a beautiful place. All these kids would have come away with new skills and a healthy attitude about experiencing the great outdoors.

I think back to my own father, and all the weekends he spent on Boy Scout trips with his three sons. He was a scoutmaster for several years, and he influenced scores of boys with his interest in nature and his leadership. Thanks Dad: wherever in heaven you are!

And a hearty thanks to all the Dads we saw bringing their children into the wilderness!

Blooming Pacific Rhododendrons line the trail; these are as elegant as the garden varieties that flower so beautifully in the Pacific Northwest

These aren’t rolling stones, because they’ve gathered a great deal of moss

Boulder Shelter is located in a place where giant boulders have tumbled down from the cliffs above (not seen in this picture) and where avalanches have repeatedly mowed down a wide path of trees. It must be a place of uneasy sleep.

In Boulder Shelter: a riff on the old Rolling Stones tune, and an unhappy lady hiker!

Karen led in the making of snowman “Boulder Bob”

Avalanche path below Boulder Camp, with Mt. Mystery and Mt. Deception distant in the upper picture

Green mosses and the bluish wood rot produced by Fairy Barf lichen (lots of little chunks, you know) on an old log

Shelter at Camp Handy; good for those many days of incessant dripping on the Olympic Peninsula

Shooting Stars were in full and glorious bloom

Vanillaleaf in bloom; this lovely ground cover is said to have a strong vanilla scent when it dries out; alas, my nose cannot detect this supposedly delicious fragrance

The Dungeness River plunges rapidly, and with beauty, from the Olympic Mountains toward its desired union with the sea

Royal Creek rushes down from Royal Basin, where we’ve had some wonderful alpine experiences in the Olympics

Karen and I were snorkling in a coral reef area south of Kona, working hard to stay together despite all the distractions of colorful fish everywhere among coral canyons. When I looked toward her, I was astonished to see a Green Sea Turtle swimming right between Karen and me, about five feet away from each of us. I couldn’t shout with glee without drowning, so instead I took pictures as we swam parallel to the turtle through the tropical aqua sea. It was enchanting.

The music for this video is from the song Silver Creek, by the German duo DOKAPI. More information and a link to their website is at the end of this article.

This was the third sea turtle I had seen on this trip. The day before, both of us had observed one basking on a narrow strip of sand beach, where it shared the space with scores of humans. It seemed content to be there, and even used its flippers to toss sand onto its back.

The endearing thing about sea turtles is their grace. Most of us humans are water nerds, graceless and gangly and splashing. In contrast, the sea turtle moves with the cadence of time itself. The swimming is slow and graceful, as if it got extra points for style and poetry of motion.

This swimming sea turtle was covered with green algae. It looked like it needed to go to one of the natural cleaning stations that certain fish have set up in the sea. These sea salons are known to turtles and fish as places where they can go for a good grooming to have parasites and algae removed and gobbled down by specialized species of fish.

In contrast, the Green Sea Turtle I had photographed several days before looked like it had just come out of the turtle wash and had been waxed afterward. There was not a speck of visible algae on it; in fact, each plate on its back sported lines of subtle color that looked for all the world like soft brushstrokes in a watercolor painting. Against the aqua color of the sea, it was stunning.

The Green Sea Turtle lives around the world in the tropics, and is endangered. It gets caught accidentally in nets and is killed for its meat and shell. Fortunately, in Hawai‘i the sea turtles are revered, and everyone is ecstatic to see them. They have special beaches where they go to lay eggs, and it would be wonderful to see the hatchlings emerging and heading for the sea, but that will have to wait for another trip.

Music for the video in this article was created by the German duo DOKAPI. It was licensed under the Creative Commons Attribution–ShareAlike 2.5; go to opsound.org/info/license/ for more information. DOKAPI has a website at dokapi.de where you can find out more about their excellent music. Our video, Dream of the Sea Turtles, is available for use under the same terms of the ShareAlike 2.5 license. Contact us at lee@leerentz.com for information.