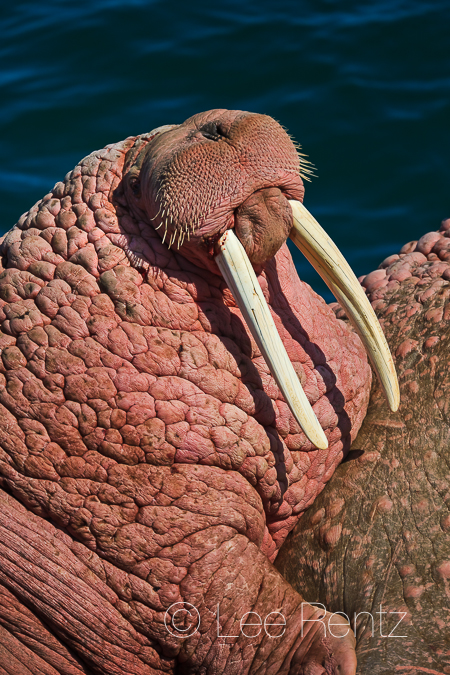 Horned Puffin near our campsite

There are times that remain hazy and golden in my memories; times when life came to a peak of wonder that is only rarely experienced. Five days on Round Island was one of those defining times in my life.

In 2009 my wife and I flew to Alaska, then took a second flight to Dillingham on the west coast, then boarded a beat-up puddle jumper to the Yup’ik Eskimo village of Togiak, then sped by tiny boat, piloted by a man of that Eskimo village, across part of Bristol Bay to Round Island, where we were greeted by Alaska Fish and Game staff. We set up camp on the small island, on platforms erected atop campsites used by ancient peoples, then set off exploring the island. Within a minute we were watching a Horned Puffin about 50 feet away standing atop a rock jutting out over the ocean. Later that day we watched half a dozen Pacific Walrus stretched out, resting atop a flat rock near shore.

Flat Rock with first view of walruses, with Dragon’s Tail in the distance 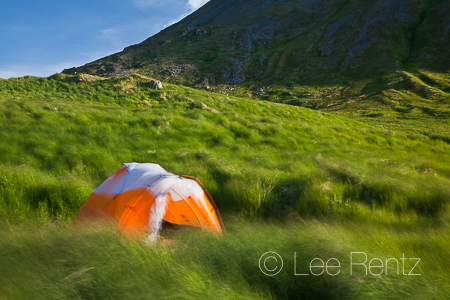 Trail along the grassy headlands near camp 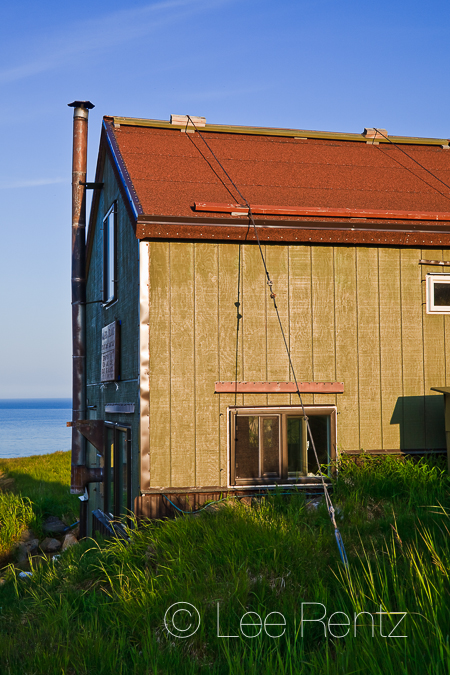 As the days went by, we listened to giant blubbery walruses singing sweetly. Endangered Steller Sea Lions performed synchronized swimming as their “Jabba the Hutt” harem defender gazed out imperiously. Wildflowers were at their peak, including the bright yellow Alaska Poppy. Red Foxes trotted around the island unseen by us, like ghosts of the landscape. Beaches were entirely filled with pink walruses resting after days of diving deep into the ocean. A high wind came up and rattled the tent with its terror all night. Parakeet Auklets gossiped constantly on the rocks below. A Tufted Puffin watched us watching him, and only snuck into his burrow when we glanced away briefly. 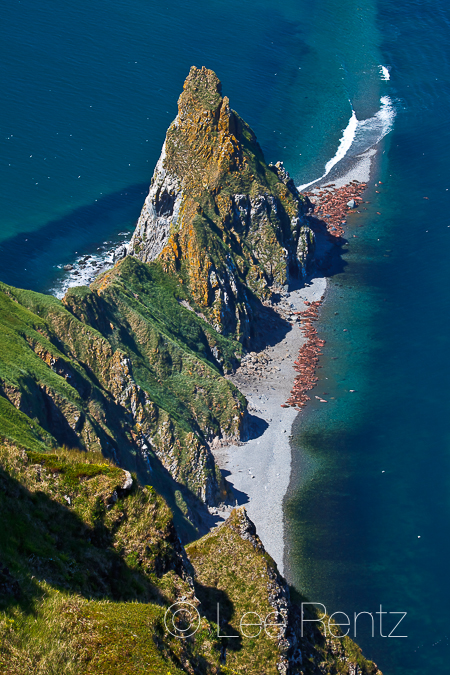 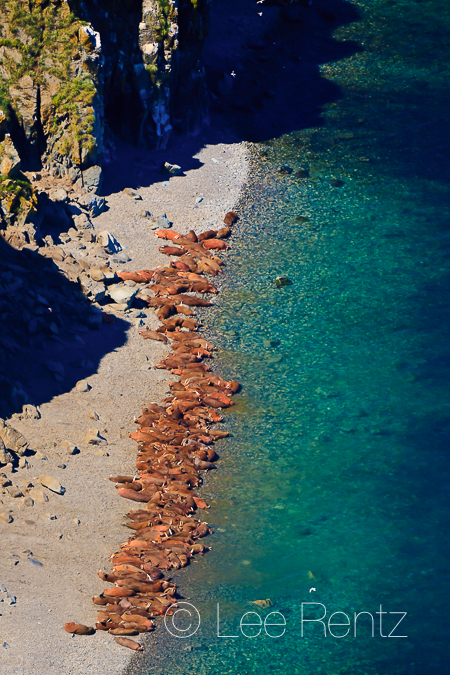 As I said, it was a peak experience, but those of you who are long-time readers of my blog know that I have already written at length about our Round Island experiences in these blogs:

Experiencing the Walruses of Round Island, Alaska

I Am the Walrus

Puffins and Auklets and Murres, Oh My!

So, why am I returning to Round Island in this blog? Because I passionately love this place and I believe that it is in danger. 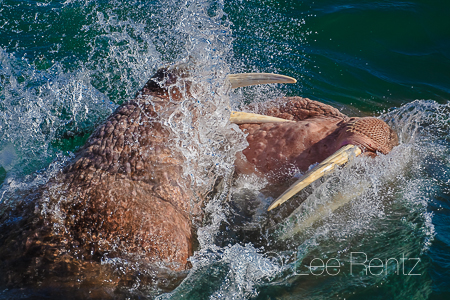 Alaska’s Department of Fish and Game, in a misguided attempt to save a few bucks, has decided to close the camp on Round Island after this year. There will be no seasonal staff to serve as island stewards, and the important work they’ve done in scientifically monitoring walrus and sea lion numbers will be abandoned. The campsites will be abandoned, and tourism to Togiak and Round Island will become a distant memory.

Why do I care? Because this is one of the greatest places in the world to experience wildlife that is not behind bars. Yes, there are a few walruses protected in zoos. After returning from Round Island, we went to see walruses in the Point Defiance Zoo & Aquarium in Tacoma, Washingon. It was a profoundly sad experience. The walruses had lost their tusks completely, as they often do in captivity. They were trained to open their mouths to have their teeth brushed and to take a fish on command, then they would swim a pattern back and forth, back and forth, in the big tank lined with fake rock. This is not how sentient creatures should live.

Steller Sea Lion harem and young out for a swim 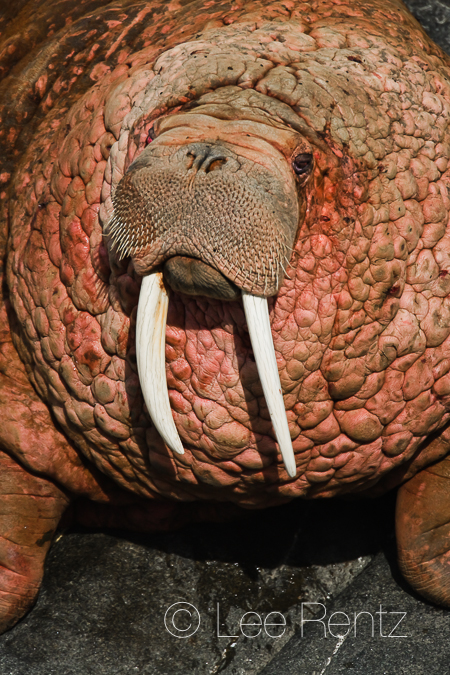 People need to see wild creatures in wild places, and that’s where Round Island shines. After we left the island, the next visitors coming were high school students from all over Alaska, camping on the island for days to study the wildlife of that magnificent place. The memories of that experience will remain with them for their entire lives. When we were there, the other visitors were two men from Manhattan, making their second trip to Round Island. Photographers and videographers from all over the world have come here to create a record of walrus behavior. Including me.

Delicate Alaska Poppies, one of scores of kinds of wildflowers at the height of summer blooming during our visit 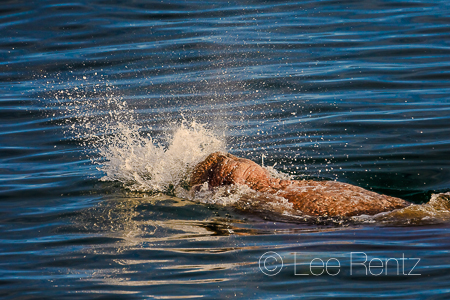 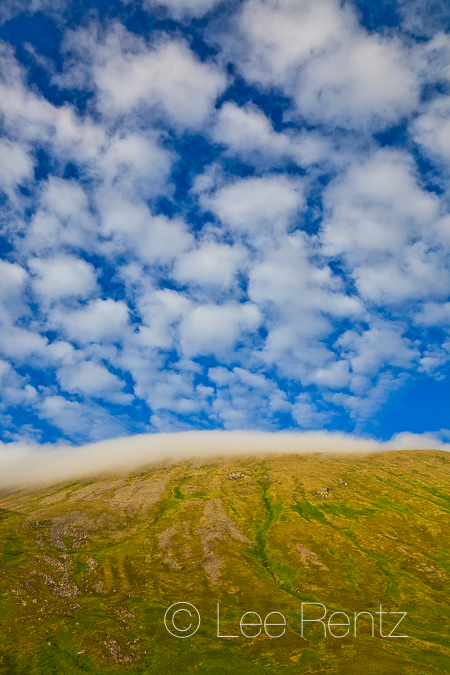 Alaska Fish and Game claims that they might still issue some permits to visit the island, but I suspect those will be few and far between. Instead, we are more likely to have surreptitious visitors shooting walruses for the ivory, and boats and planes buzzing the walruses and creating panicked stampedes that will trample and kill individuals. People will be able to land on the island with nobody knowing, and will undoubtedly force walruses away from the beaches. The island will no longer be a sanctuary.

Is this speculation on my part? Of course, but it is informed speculation based upon my experience on the island. When we were there, we felt that the two staff members were extremely serious about their jobs, and that their first priority was to protect the walruses. When we were seen by the refuge manager watching walruses from atop a cliff, we were told in no uncertain terms to crouch down so that our silhouettes wouldn’t scare the walruses off their rock. I felt bad at violating the rules, and in retrospect I’m glad that someone was there to keep protection of the walruses as top priority.

Abandoning the camp on Round Island would save $95,000 per year, which I think is a drop in the bucket compared to the lost opportunities for environmental education and tourism in the region, which bring far more dollars than that to the Alaskan economy (our trip alone added $5,000 to the Alaska economy–it isn’t cheap to get to remote places!).

Can this decision be modified or reversed? Who knows? All we can do is try. If Alaska Fish and Game is adamant that they are going to save money this way, perhaps they could come up with a Memorandum of Understanding with The Nature Conservancy or another not-for-profit to operate the island as a sanctuary with a provision for allowing visitors to come and camp. Perhaps the National Park Service should buy it from Alaska and operate it as a national park unit, similar to the manner in which Channel Islands National Park off the California coast in operated. Perhaps an Eskimo corporation could run it. Maybe volunteers could assist a paid staff member. Perhaps the University of Alaska could run the visitor operations in conjunction with research. Since the infrastructure is already there, it would be obscene to just abandon it, and it seems that the state has not explored these and other avenues for protecting the sanctuary.

In the meantime, if you would like to write a rational and passionate letter supporting the continued use of Round Island as a place to view Alaska’s native wildlife, please contact: 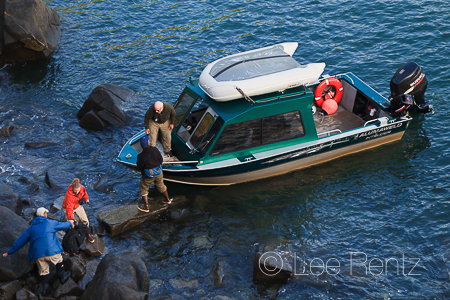 Ferrying gear to the small boat just prior to departure 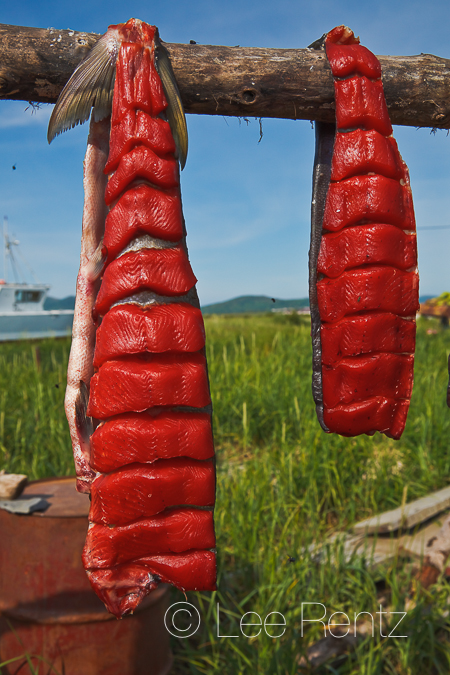 Some of the Sockeye Salmon from Bristol Bay smoking at an Eskimo smokehouse in Togiak; the Sockeye Salmon fishery here is called the most sustainable fishery in the world, but the Pebble Mine proposed in the watershed could change that. That is another important environmental issue facing the region (see below for a link to more information).

For what could be your last chance to visit this enchanting isle, go to http://www.wildlife.alaska.gov/index.cfm?adfg=refuge.rnd_is

To read the article that announced the closure of Round Island, go to Round Island Closure

To read what Trout Unlimited has to say about the Pebble Mine, go to Save Bristol Bay

To see my photography, go to Lee Rentz Photography